FUGITIVE CAPTURED IN PASCO December 13, 2019 --
Pasco Police arrested Andrew Dubail early Friday morning after officers say he tried running from them in a car and crashed into another vehicle.

Officers located a handgun that had its serial numbers removed that they say Dubail ditched after the crash.

Dubail's a convicted felon and sex offender who had multiple warrants out for his arrest and Pasco Police say they've tied him to recent package theft cases there.

Pasco Police say the others involved in the collision are okay,

Dubail was taken to a hospital to be medically cleared, then booked into the  Franklin County Jail on several charges. 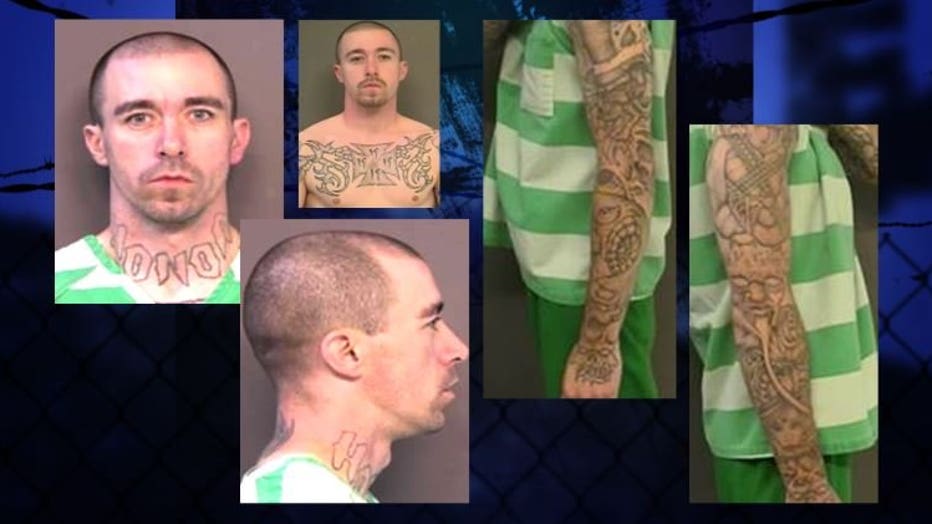 Tulalip Police have a lot of history with Dubail and they use extreme caution whenever they encounter him. Officers had to threaten him with a taser the last time he was arrested for failure to register as a sex offender. At the time, he was strapped with a loaded pistol, which is illegal for him to have, because he is a convicted felon.

He got out of the Snohomish County Jail and didn't show up to court, so now deputies are asking for your tips to find him.

“We definitely want him off the streets. He has prior convictions for Rape of a Child, Unlawful Possession of a Firearm, failure to register and 1st Degree Burglary,” said Courtney O’Keefe with the Snohomish County Sheriff’s Office. Dubail has also been busted for several thefts, trafficking stolen property, hit and run and DUI.

He has a ton of tattoos, including his last name on his back and the ones you see in his photos below. The most visible is the word ‘Honor’ tattooed across his neck, but he also has an Iron Cross on his chest and a full sleeve of ink on both arms. "The suspect also has swastikas tattooed on his right rib cage and is known to be a White Supremacist. We absolutely want him off the streets. He continues to re-offend and he is a danger to our community,” said O’Keefe.

Dubail's last known address was in Everett, but he is believed to be homeless right now.

He has a history of hanging out at the Tulalip Resort Casino, so if you spot him there, or know where he's hiding – call 911 -- then submit the information to Crime Stoppers anonymously to get a cash reward of up to $1,000 if your tip helps lead to his arrest. Use the P3 Tips App on your smart phone that you can download for free, or call the hot line at 1-800-222-TIPS(8477).