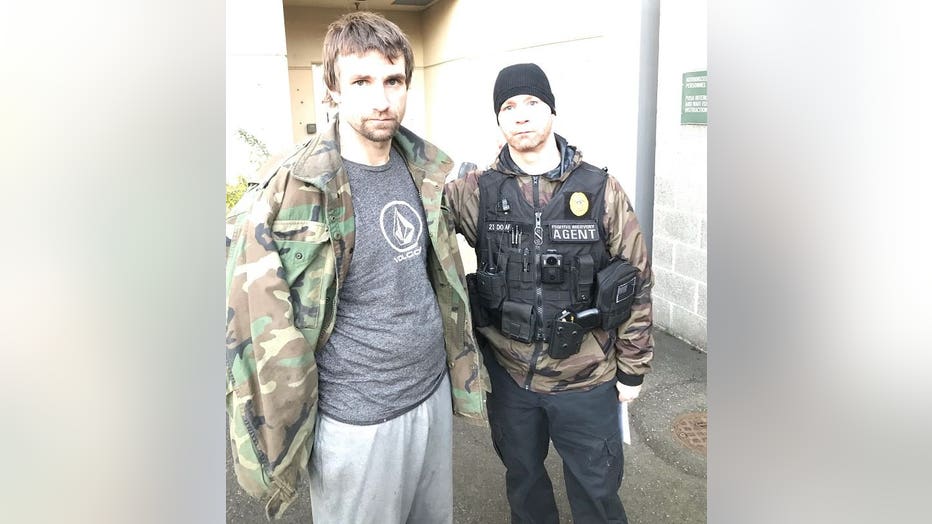 He's booked in the Snohomish County Jail on several charges, including obstructing law enforcement, violating domestic violence court orders, lying to a public servant and possession of a controlled substance with no prescription.

FUGITIVE WANTED IN SNOHOMISH COUNTY August 13, 2019 --
The Snohomish County Sheriff's Office says this wanted felon, Raymond Ralph Krona III, could be hiding in the woods around the towns of Index and Gold Bar in the southeast side of the county.

Detectives say Krona’s a skilled survivalist who knows how to live in the wild.

He's wanted in Snohomish County for assault, drugs and a domestic violence no contact order violation.

He also has a Department of Corrections warrant for breaking probation on a conviction for assault with a deadly weapon.

There's also probable cause to arrest Krona for obstructing law enforcement after he managed to ditch deputies last month near Index. "They've been searching for him since the first week of July, when they spotted him driving in a vehicle with a female who he's restrained from being around. They attempted to make a traffic stop on his vehicle. He jumped out of the vehicle, fled on foot. Multiple law enforcement agencies did respond, including several K9 teams. They set containment of the area and he was still able to escape. It's very important that we get him off the streets. He continues to commit crimes and violate court orders. He runs from law enforcement every time we come in contact with him and we're hoping that at this time the public can help us locate him," said Courtney O'Keefe with the Snohomish County Sheriff's Office.

If you know where he's hiding -- contact Crime Stoppers through the P3 Tips App on your smart phone that you can download for free, or by calling the hot line at 1-800-222-TIPS(8477). It's anonymous -- you never have to give your name -- and you'll get a cash reward of up to $1,000 if your tip helps lead to his arrest.