FUGITIVE CAPTURED June 18, 2020 -- Seattle Police have arrested the suspect who handed a note to a Bank of America teller, implying she had a weapon and demanding money on May 1st, 2020.

Her criminal history includes convictions for:

Anderson would still be on the streets if not for a sharp-eyed WMW viewer who spotted her in downtown Seattle and flagged down a Seattle Police sergeant.

"He says, 'That gal was featured on Washington's Most Wanted as a bank robbery suspect and if you go to the website, you'll see what I'm talking about, so he approaches the female suspect. He walks up and says, 'Do you recognize this person?' She looks at it and says, 'That's me.' She just cops right out, so they cuff her up, take her back to the precinct, turn her over to the robbery detectives. She sits in there and gives a full confession. That's awesome and it's because of you, watching the show, that we now have another bank robbery suspect in custody," said Ret. Det. Myrle Carner with Crime Stoppers of Puget Sound.

Prosecutors have charged Anderson with Attempted Robbery in the 1st Degree.

FUGITIVE WANTED IN SEATTLE May 15, 2020 -- This bank robbery case is fairly unusual and it will be interesting to find out the ‘why?’ behind the crime.

Surveillance video showed a woman walking into the Bank of America on 4th Ave. in Seattle carrying a purplish-mesh bag.

As she approached the teller, the camera got a good look at her face.

Detectives think she is in her 40's or 50's, about 5'2" with a thin build and she was wearing black-rimmed glasses.

Police says she is wanted for trying to rob the bank, even though there was a security guard. The video even shows him walk behind her at one point.

"She walked up. She approached the bank teller and she presented a demand letter and she also implied to the teller that she had a gun in a bag that she was physically carrying,” said Ret. Det. Myrle Carner with Crime Stoppers of Puget Sound. The teller refused to give her the money and walked away from the window. The suspect stood there for a while, before finally giving up and leaving the bank.

Even though she didn't get any money, this is still considered a felony crime.

Detectives are hoping somebody recognizes her since she didn't cover her face. “Rarely do we see female bank robbery suspects. She has the mask down. Very distinctive clothing. You look at that. Some say it was blue and white. Some say it was black and white, kind of a checkered pattern or a plaid on that shirt. Her hair is tied-up in a bun, but the fact is you're going to get a clear look at this lady and somebody watching knows exactly who she is,” said Ret. Det. Carner. 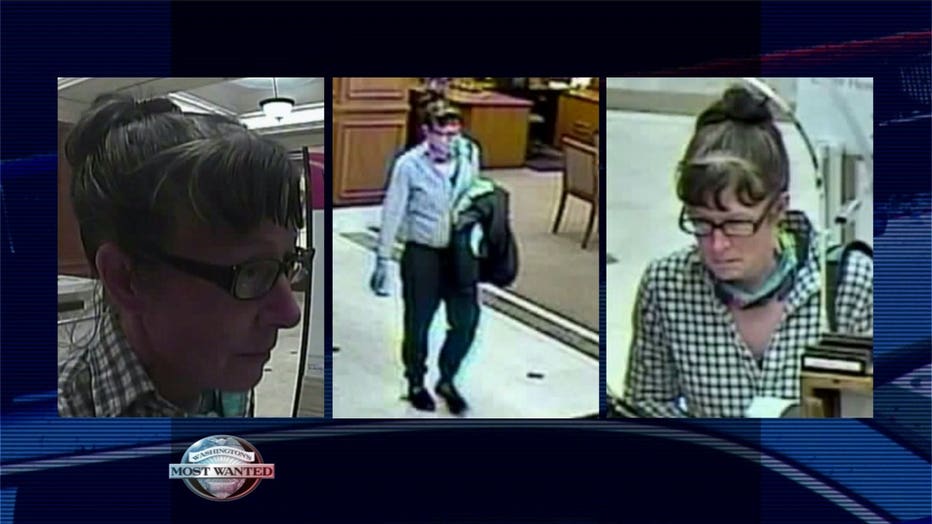