Today, the U.S. Marshals led Western District of Washington Fugitive Task Force, arrested Jason Smith-Brennan, 41, in Mount Lake Terrace. Smith-Brennan was located after an anonymous tip was received by Crime Stoppers of Puget Sound. Members of the task force were able to locate Smith-Brennan inside a residence and he was arrested without incident.

Acting U.S. Marshal Jacob Green said, “The arrest of Smith-Brennan is another great example of the community utilizing our Top Ten Most Wanted program to help catch the most violent offenders. We continue to thank the public for its assistance, while also recognizing the hard work of all the agencies involved in this arrest such as the Washington State Department of Corrections, Snohomish County Sheriff’s Office, Everett Police Department and Mukilteo Police Department.”

The Western District of Washington Fugitive Task Force is comprised of Deputy U.S. Marshals from Washington, and other federal, state and local law enforcement agencies. The task force’s primary mission is the location and apprehension of “Violent” offenders. Of those arrested, various offenses include homicide; failure to register as a sex offender; sex crimes; firearms; and federal probation violations. The United States Marshals Service is also the nation’s oldest federal law enforcement agency. Annually, U.S. Marshals arrest more than 50 percent of all federal fugitives, and serve more federal warrants than all other federal agencies combined.

SEATTLE -- The Western District of Washington Fugitive Task Force is asking for the public's help to find Jason Smith-Brennan.

In September 2017, The 40-year-old left from Bishop Lewis Work Release in Seattle and then failed to report to his Department of Corrections supervising officer as required.  He has a DOC warrant for his arrest. 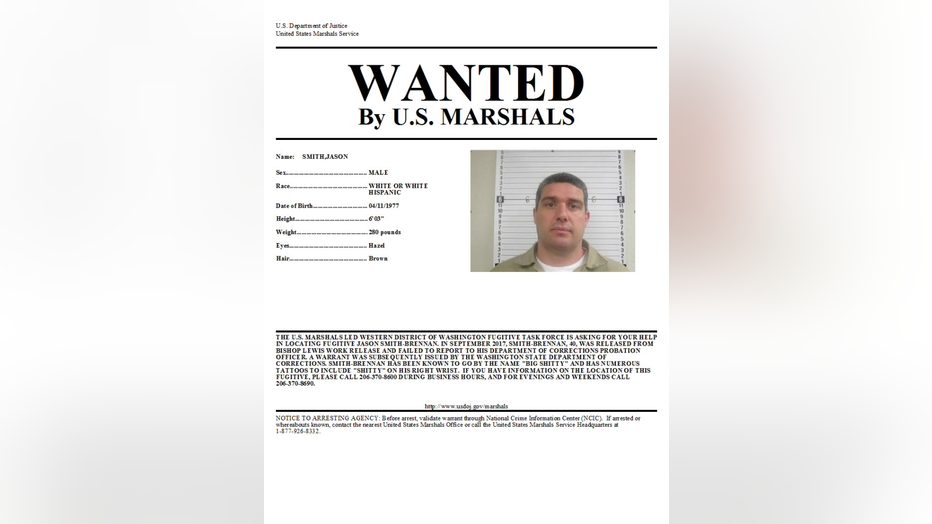