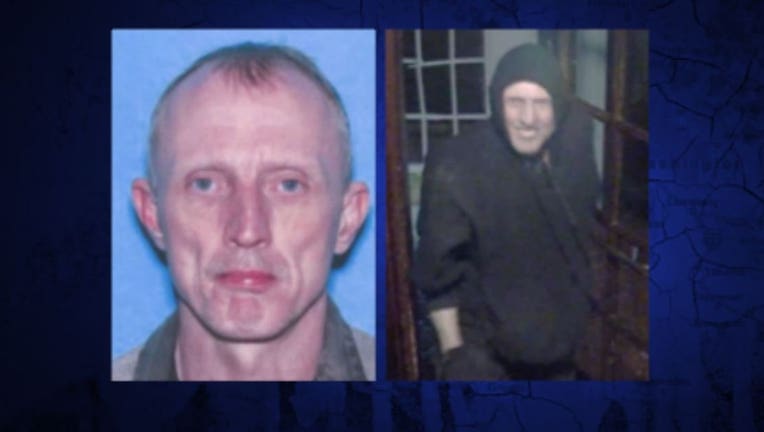 He was booked into the Spokane County Jail on burglary and malicious mischief charges.

"Thanks to tips from Washington's Most Wanted viewers, we were able to identify our suspect as 49 year old, Robert Talley. From what we know about him, he tends to be a couch surfer, so tracking him down to a single location at any given time has been pretty difficult. We did receive a tip on Talley's location, however, by the time our agents were able to get to the house where he was supposed to be, we found out we missed him by just a couple minutes," said Heather Songer with the Washington State Gambling Commission.

Talley is wanted for burglary and malicious mischief.

He also has a warrant for his arrest in Franklin County.

He could be driving a red 4-door Ford Tempo.

A camera watching the front doors of Aces Casino on Division St. shows glass shatter to the ground, the crook climb in cautiously so he doesn't get cut, then him coming in through the lobby door.

From there, this burglar who the Washington State Gambling Commission hopes you can help identify, spent hours causing chaos inside the casino. "He broke some casino equipment. He shuffled through some items. He actually ended up only taking some liquor, a little bit of candy and a small amount of money, but the damage that he caused to the casino equipment and the front door is going to cost quite a bit for the business owner to repair,” said Heather Songer with the Washington State Gambling Commission. “When we were reviewing the surveillance video, we were actually shocked to see that the suspect was in the casino for around 2 hours, so that tells us he was not afraid of getting caught and this is probably something he`ll do again in the future, unless we get him caught."

The burglar broke in around midnight on Sunday, April 8th.

One photo shows him in a corner without his hoodie on, so you can make out what his hair looks like. It seems short, maybe bald or thinning on top and blonde or light-colored.