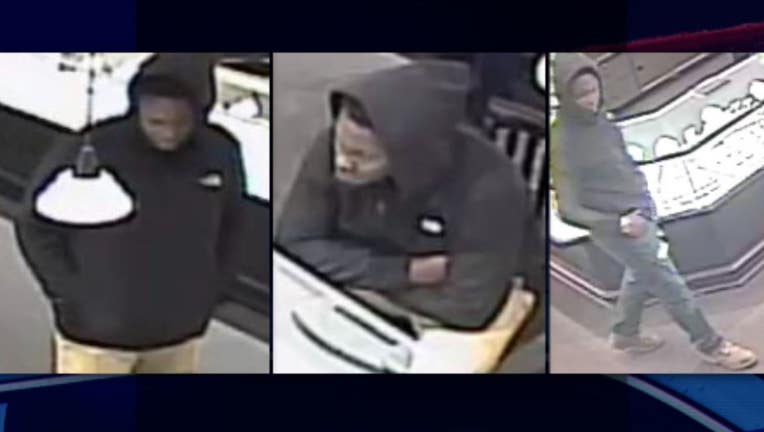 WANTED IN KIRKLAND --
Did you get your loved one some jewelry for Valentine’s Day? One jewelry store customer decided he didn't want to pay for his high-priced ring and pulled off a ‘snatch and grab’ – and police say he's done it twice.

He’s the suspect in a robbery in Federal Way where he was wearing yellow pants.

He’s also wanted in a hit at the Fred Meyer in Kirkland's Totem Lake area, where detectives say right before he ran he threatened to have a gun.

"He looked calm. He didn't look like he was particularly nervous. He had engaged in some type of conversation with the clerk, it wasn't the first ring that he was shown, he took a little bit of time, so yeah, he looked like he was comfortable with this,” says Kirkland Police Sgt. Rob Saloum. “He seems like he kind of knows what he's looking for, wasn't just random items that were just about. He had asked the clerk to see certain items. This is real similar to a case that Federal Way Police is working, with the suspect description being very similar, the clothing that was worn."

In that heist he wore a dark North Face hoodie and the yellow pants.

In the Kirkland hit he wore what looks to be the same hoodie and blue jeans.

Again, he threatened to have a gun in the Kirkland heist, so he could be 'armed and dangerous.'

Detectives think he's black, in his late 20`s to early 30`s, with a medium build.