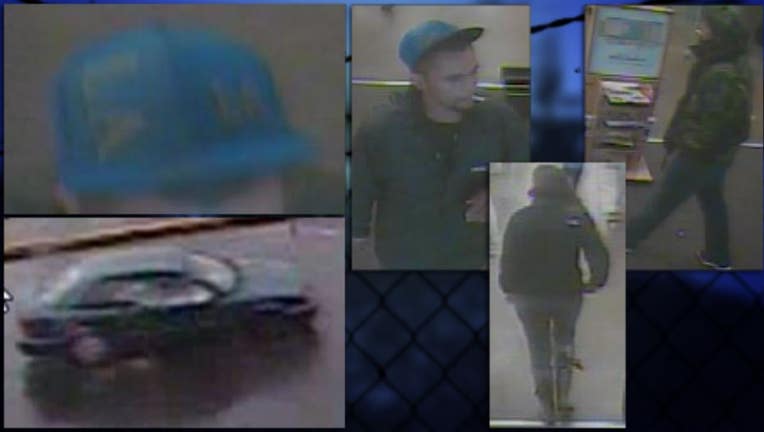 WANTED IN SEATTLE -- A crew of violent crooks turned a quiet evening at a Seattle grocery store into chaos and tears during a robbery. Seattle Police need help identifying them, especially the main suspect wearing a blue baseball hat that says ‘L.A.’ on the front and a black jacket with some white lettering on the left side of his chest. He's got a goatee and detectives believe he's Hispanic. Surveillance video shows him come running through a crowd of people at the Fred Meyer store in Ballard, dousing everyone with bear spray to clear a path for a woman stealing a cartload full of stuff. She's followed by a thief in a camouflage jacket running out with a vacuum cleaner. One victim in a Seahawks jersey is knocked over and everyone is left with burning eyes and coughing. "I mean this stuff is designed to stop a grizzly bear and when you spray it in a human's eyes or in their face, they're incapacitated,” says Ret. Det. Myrle Carner with Crime Stoppers of Puget Sound. “As you watch the video, it isn't just one victim getting sprayed, this scent goes everywhere, so everybody that's in that vicinity gets a part of that. The whole thing is chaos, he's just spraying, he doesn't care, he really doesn't care."

The cameras by the exit show the first suspect closely followed by the girl pushing the cart and then the third suspect with the box. They ran outside past the Flower and Garden section and then got into what detectives say looks like a late 1990's Honda Civic that’s missing its front right hubcap or possibly with a different colored rim. "They almost get in a wreck,” adds Carner. “He goes through an intersection and then another car that has the legal right away, he just about T-Bones him, has to go around him so the whole thing is, ‘let's get away regardless of what happens.’" The camera’s didn’t catch very good looks of the other two suspects, but the woman had on a black North Face jacket on and the vacuum cleaner crook was wearing a camouflage jacket. If you recognize anything about the three suspects, their getaway car, or know anything about the crime that can help get them caught, call an anonymous tip into: CRIME STOPPERS: 1-800-222-TIPS You must call the Crime Stoppers hotline with your tip to be eligible to receive a cash reward for information leading to a fugitive’s arrest. CLICK HERE for information on how to TEXT A TIP to Crime Stoppers