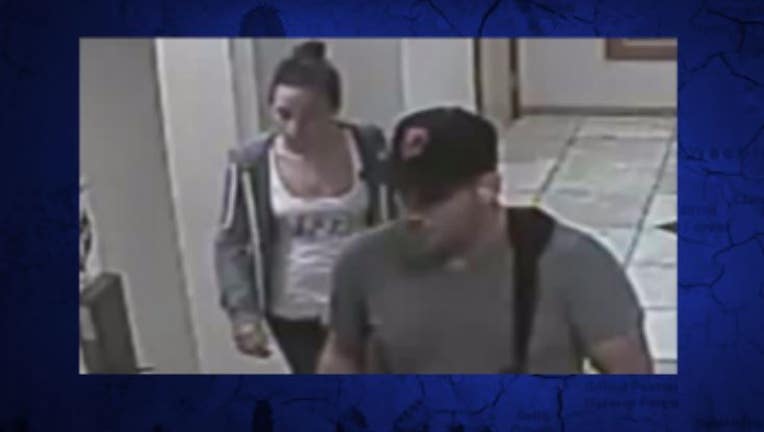 WANTED IN EDMONDS -- Edmonds Police detectives need you to take a look at this young couple breaking into a condo building in Everett. There’s likely no way they could have missed the surveillance cameras, but I guess they didn't care and these car prowlers stole more than just property. It was the third time this year that the building had been broken into by thieves and every time the owner improves their security, including new locks and cameras and now one woman who lives there is hoping that surveillance system helps catch the couple who stole a sentimental piece of jewelry from her. Doug Spee has learned a lot about security this year. "Most of them don't seem to look up and read, ‘You're on camera.’" He built the condo building in 2002 and until this year had never had a burglary. Now, Edmonds Police are trying to identify the couple caught on camera breaking in last August. Spee adds, "The guy in the photo simply slips a flatbar in, inside the electric strike and just jimmies the lock without even damaging the door, he was that good.”

The video shows the two walk into the lobby and make a bee-line for the elevator to the garage where they smashed out Wendy's window. "When I came downstairs and saw that indeed my car was apparently the only car that was broken into, I was mad and I said something you can't say on camera.” That's because the couple stole her two purses. You can the female suspect carrying them in the video. They also took a brooch belonging to her mom who passed away last year. "It was something that my sister and I had just starting going through her things and my sister had given me that particular brooch." So, why did they only break into her vehicle? We took a look inside and what I found is a lesson for everyone. "This is full of CD's, which I'm sure my taste isn't theirs so they didn't take it,” Wendy says while looking at the large purse-like case of CD’s in her car. I let her know if thieves see that purse, they're going to break her window, they don't know that it’s just CD's and that she needed to take that out for sure. All told, the crooks did about $1,500 worth of damage, because they also broke the lock on her door. That's not what really mattered the most though. "I'd love to have that pin back,” Wendy says. “It means nothing to anybody but me and it's certainly not worth any money." Meanwhile, Doug's been busy making the building more secure. He only spent about $120 for a little, inexpensive camera system that even alerts him on his phone when somebody walks in afterhours and he's working on that front door. "I'm going to be putting a lock cover, strike cover on which you will see quite often and that will prevent that next time. He's glad his camera system at least got the shots of the suspect's faces. “We definitely know it`s a male and female, both in their 20`s, both are white and you can see their clothing description pretty well,” says Edmonds Police Sgt. Shane Hawley. “But, we don`t know who they are, we`re hoping that someone can take a look at those photos and maybe identify one if not both of them.” If you can tell Edmonds detectives their names, call an anonymous tip into: CRIME STOPPERS: 1-800-222-TIPS You must call the Crime Stoppers hotline with your tip to be eligible to receive a cash reward for information leading to a fugitive’s arrest. CLICK HERE for information on how to TEXT A TIP to Crime Stoppers