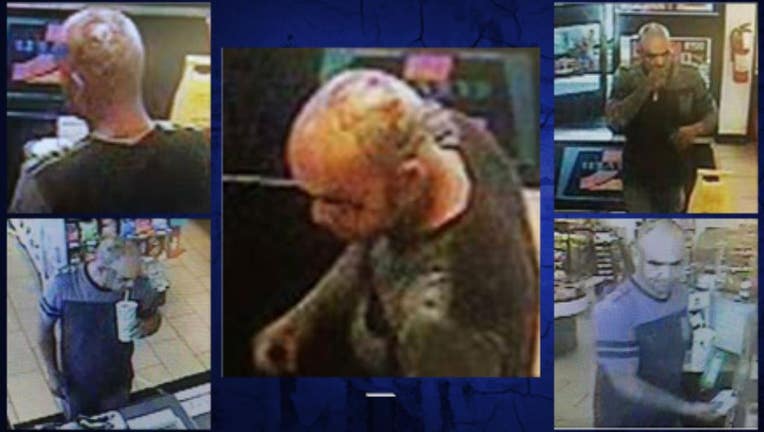 WANTED IN TUMWATER -- A mystery Tumwater to Tacoma as police try to identify this man with the tattoos on his head. Detectives have been following the clues he left behind for months. He’s wanted for questioning in a string of burglaries at local businesses. When she walked into work at the Lines of Denmark clothing store in Tumwater, a customer service rep knew something was wrong. “I took a couple more steps towards the control panel to turn the alarm off and noticed a mannequin down on the ground.  I stopped there." She quickly backed out and called police who found signs of a burglary. “He went through the warehouse,” says Tumwater Police Det. Jen Kolb. “Bypassed quite a few high-value items and he went straight for the alarm and damaged the alarm, ripped it off the wall, cut some wires and then went into the storefront where he went straight for where they keep their cash box.” The store says he didn’t get much. “No more than $100, maybe $50. More damage than money taken.''

Outside, officers found the cash box, the suspect's coat, a 7-Eleven cup and a receipt from a QFC in Pierce County. Using that evidence, Det. Kolb tracked down several surveillance videos of the suspect including one in the grocery store where he’s wearing the same shirt at the 7-Eleven near the clothing store. “We see him walk into through the front door,” says Det. Kolb. “We see him walk back. We see him purchase a fountain drink, take it to the counter, stand in line and wait to make his purchase. He’s loitering around waiting for the person in front of him to finish and then he makes his purchase and walks out the front door.” And there was one other clue on the video that tied him to a second burglary earlier that night. “You can see the drywall dust on the knees of his jeans.” Just before the break-in at the Lines of Denmark, Det. Kolb says the same burglar punched a hole in a wall to into Inferno’s Pizza. Grainy video shows him walking toward the camera and looking around for something to steal. Det. Kolb says he left behind an important clue. “There’s a wet floor sign that would indicate they had mopped the floor the night before so those footprints that were made from drywall dust were not on the floor the night before and the footprint is consistent to the tread of converse tennis shoes.” He was wearing Converse shoes in the 7-Eleven. He’s got some pretty significant tattoos all over his head. One of them might possibly be a skull at the crown of his head but because of the video, I can’t say for sure and additionally he has several tattoos on the side of his face,” adds Det. Kolb. The employees at Lines of Denmark would like to see him caught because of all the damage he did. “I would love for him to pay  for the cost to get things repaired, especially the alarm system which was more expensive than paying for the doors to be fixed.” So, take another close look at him and the ink on his head. He wore jeans, black converse tennis shoes and a short-sleeved shirt. If you know his name, call an anonymous tip into: CRIME STOPPERS: 1-800-222-TIPS You must call the Crime Stoppers hotline with your tip to be eligible to receive a cash reward for information leading to a fugitive’s arrest. CLICK HERE for information on how to TEXT A TIP to Crime Stoppers