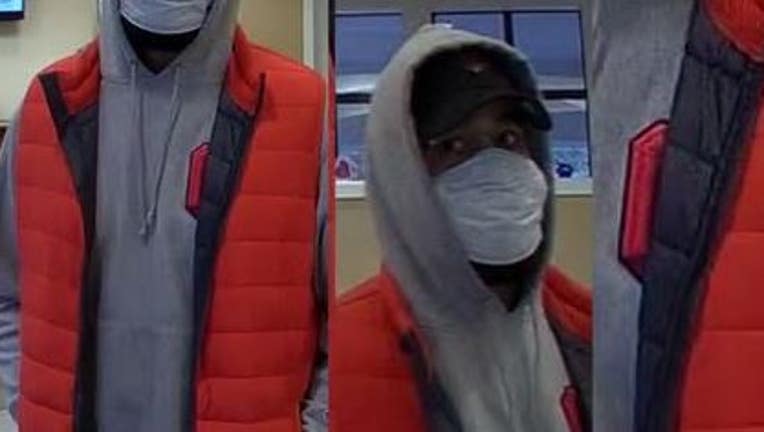 WANTED IN PIERCE COUNTY - Pierce County Sheriff's detectives need your help to identify an armed robber on a crime spree.

I'm dubbing him the ‘Beaver Fan Bandit,’ because of the Oregon State University-colored vest and hoodie with the school's bright orange ‘O’ on the chest he wore when he robbed the Columbia Bank on Meridian Ave. East in Puyallup on February 1st at 9:30am.

"He milled about inside the front of the bank for quite a while and he's just waiting for somebody to help him, the teller couldn't help him right away and he's in there for a couple minutes until they finally help him," said Pierce County Sheriff’s Sgt. Darren Moss. Detectives say he slid a note to the teller saying he had a gun, but he never showed one. The clerk gave him some cash and he jogged out to a Ford Edge and drove off.

Detectives say he’s the same suspect who robbed two gas stations in Spanaway the night before.

He drove a white Chevy Silverado pickup truck for the first one, then switched vehicles to the Ford Edge to rob the second gas station just minutes later and the bank the next morning.

"We're really concerned that this guy's going to keep doing robberies until he's caught. We want the community to be aware. We want you guys to give us tips and help our detectives put this guy behind bars," said Sgt. Moss.

Detectives say he's about 6’0" and weighs around 220 pounds.

If you recognize him, use the P3 Tips app on your smart phone to submit the information to Crime Stoppers, or call the hot line at 1-800-222-TIPS(8477). It's anonymous and you'll get a cash reward of up to $1,000 if your tip helps identify him.