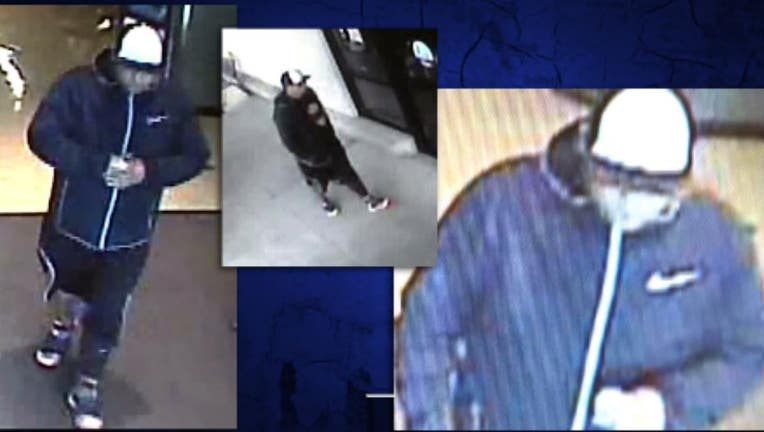 WANTED IN OLYMPIA-- A Bonney Lake man is recovering at home, after being beaten up by a stranger in a grocery store bathroom. Police are hoping the public can help them identify the suspect, before he can hurt anyone else. “It took me off my feet, one shot, he had a wallop for sure,” says Jeff Howell. Howell says he’s never been in a fight before, and he wasn’t expecting to get in one Monday morning when he went to the Safeway in Olympia to do some security work. “You’re at a grocery store, you think what safer kind of place, it says Safeway right in the name.” But just before 8:30 am, a man walks into the store and heads towards the men’s restroom. About a minute later, Howell walks into the same restroom. “I walked past him and made like a tenth of a second eye contact with the person,” Howell says. “Then he said something strange to me, I don’t remember exactly what it was. Something like you’re not going to do it, or I’m not going to let you do it again.” Before Howell could make sense of it, he says he was hit and knocked to the ground.

“I tried to put my hands to defend myself, because I could kind of see he was coming at me again but I couldn’t even focus.” Olympia police say this is an unusual crime. “We don't get stranger assaults very often in Olympia,” says Officer Brenda Anderson. They’re sharing surveillance video from the store, because they think the suspect might be a local resident. “He clearly is familiar with the Safeway, he clearly knew where the restroom was. There wasn't any hunting around. He went specifically to that location and then left.” Howell says he’s never seen the man before, and he doesn’t believe he was targeted. “I just think it was a random act of violence. He did take my phone, but I don’t think that was the motivation. It was an afterthought.” He’d like to know why he was hit. But he’s more concerned with getting the man identified and off the street. “Because if he’s that violent of a person, the next time he might hurt somebody even more. And it won’t just be stitches, it’ll be broken bones.” If you can help police identify the suspect, call an anonymous tip into: CRIME STOPPERS: 1-800-222-TIPS You must call the Crime Stoppers hotline with your tip to be eligible to receive a cash reward for information leading to a fugitive’s arrest. CLICK HERE for information on how to TEXT A TIP to Crime Stoppers