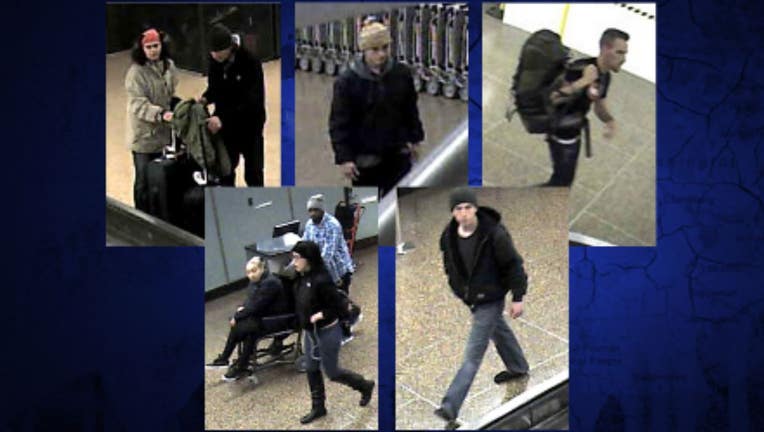 SEATAC -- They look like any other travelers getting their bags at the airport, but police say hidden among the passengers are thieves looking to snag your luggage. Fortunately, Sea-Tac airport has an extensive surveillance system, so Port of Seattle Police are hoping you can identify the suspects caught on camera. Watch the video to see a suspect picking up a bag off the conveyer belt. He then kind of shakes it, judging what might be inside, clearly it doesn’t belong to him. At first glance, you might think the people seen helping a woman in a wheelchair through the airport are good guys, but nope, Port of Seattle Police say they were really there to help themselves to a passenger's luggage. Detectives say another couple seen on camera is responsible for stealing 10 bags. They returned four times, but haven't been back in the last couple of weeks. The video shows the female suspect in action as she waits for someone’s red bag and then snatches it off the conveyer.

It’s despicable behavior to travelers like Vijay, “This is Christmas and they have valuable baggage and it is theirs.” Port of Seattle Police Sgt. Jim Tuttle says, "What we're seeing as the criminals become more sophisticated in coming and stealing bags is they're looking like passengers, looking like travelers and trying to fit in." Sgt. Tuttle says Sea-Tac airport is on track to hit 42 million passengers this year, the number of bags stolen in comparison to that is small. "We're looking at maybe 150 bag thefts for this year. With that being said, it really makes no difference when it's your bag.” So, officers patrol the baggage claim area, sometimes even undercover and they've trained airline employees to look for the suspected thieves like a suspect who stole a total of five bags on three separate days. Port of Seattle Police urge you to get to your luggage as soon as you can, never put valuable items in your checked bags and make it stand out. "Passengers will take their checked bag and mark it with something very conspicuous like a giant, pink, duct tape X,” says Sgt. Tuttle. Great advice to follow as your plan for your next flight and until these thieves are identified and stopped.. If you can identify them any of them, call an anonymous tip into: CRIME STOPPERS: 1-800-222-TIPS You must call the Crime Stoppers hotline with your tip to be eligible to receive a cash reward for information leading to a fugitive’s arrest. CLICK HERE for information on how to TEXT A TIP to Crime Stoppers