SEATTLE - Crime Stoppers of Puget Sound is offering a cash reward of up to $1,000 to anyone who can identify the two arsonists who hurled three Molotov cocktails at the Seattle Police Officers Guild in the 2900 block of 4th Ave S. in SoDo Monday night.

"Clearly, what they are going to do is continue this criminal activity and they’re going to kill police officers. That’s their intent," said Seattle Police Officers Guild President Mike Solan.

Officers happened to pull into the parking lot 90 seconds later and were able to extinguish the flames. Otherwise, they believe the building may have had extensive damage or even burned to the ground. 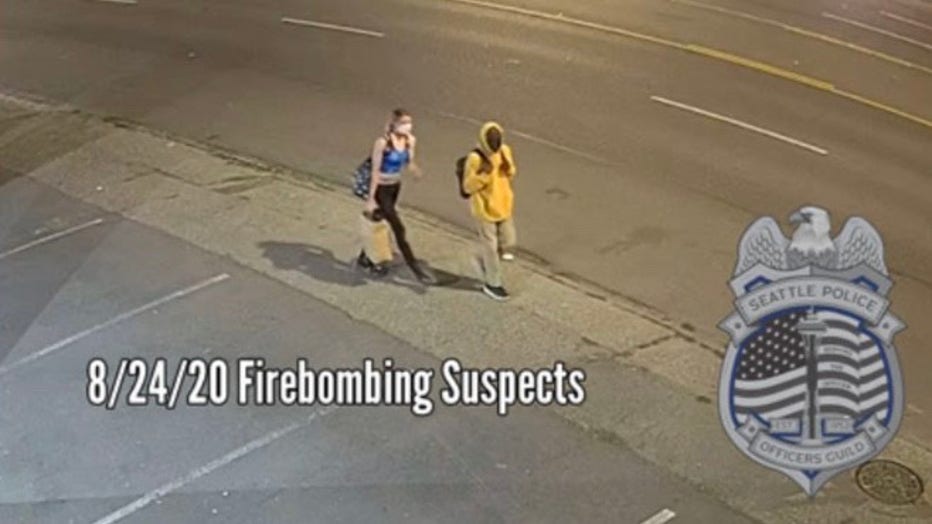 "I call on our elected officials to publicly condemn very strongly these criminal actions, these domestic terrorist actions against our community," said Solan.

The suspects are described as an unknown race male wearing a yellow pullover with hood, dark-colored backpack, light-colored pants, and black and white t-shoes. The second suspect is a thin, white female wearing a black and blue colored pullover, black pants, and boots.

Officers also want to speak with the driver of a white van and a motorcyclist who pulled into the parking lot next to the guild. The two suspects approached them before the arson and bummed a smoke.

If you can identify either suspect or have information for Seattle Police, you can remain anonymous when you submit it to Crime Stoppers of Puget Sound. Send the info through the P3 Tips app on your smartphone or go to www.P3Tips.com.