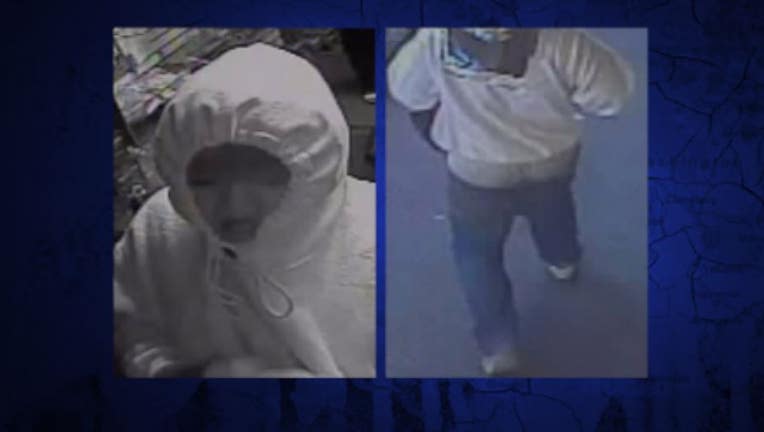 WANTED IN SEATTLE -- Pot shops, smoke shops -- businesses where the bad guys think there's a lot of cash on hand -- along with drugs or cigarettes to snag as well are all top targets for robbers, just like the ‘Golden Smoke House’ on Rainier Ave. S. in Seattle where detectives hope you can help identify the armed crook who made a mess with the money he stole from the smoke shop. "You see the suspect walk in the store. Now, he's got a very distinctive walk, so pay attention to how he walks because somebody probably knows somebody like that,” says Ret. Det Myrle Carner with Crime Stoppers of Puget Sound. “You see him go out of sight and this is where the robbery takes place. When you watch the black and white video, you're actually going to see the robbery take place. You watch real close, because he's up there, he confronts the clerk and then all of a sudden he's just starting to stash money into his bag. He doesn't even care whether it gets in the bag, because if you watch close money's falling all over the place. You think that's enough, then he turns around and you can watch his hand, he has a coat over the gun, but you'll see the end of the barrel. Then when you watch closer he's reaching over, helping himself to cigarettes, whatever and he's just jamming stuff in his bag and you watch again and money's falling out, so obviously, he may be high, who knows what, but he's armed and dangerous. And then you see him walking back out, very nonchalant. He's pretty well covered up but if you look real good in this video you'll notice that the coat he's wearing is actually inside out, there's probably a reason for that, probably had a very distinctive logo on it, maybe some kind of North Face or athletic apparel, who knows.”

If you recognize his face, demeanor or anything that can help detectives figure out his name, call an anonymous tip into: CRIME STOPPERS: 1-800-222-TIPS You must call the Crime Stoppers hotline with your tip to be eligible to receive a cash reward for information leading to a fugitive’s arrest. CLICK HERE for information on how to TEXT A TIP to Crime Stoppers