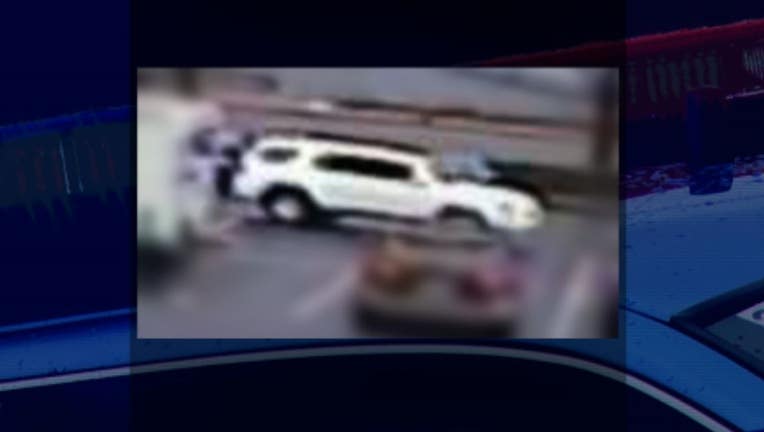 WANTED IN SEATTLE -- Seattle police hope you seeing video of a white Ford Escape will help solve a terrifying kidnapping of a woman from a grocery store parking lot who was then forced to withdraw $20,000 in cash. Take a look at the surveillance video from the QFC on Rainier Ave. South. Detectives want you to pay particular attention to that white Ford Escape you’ll see driving through the parking lot. They believe it's a 2008 to 2011 model and may hold the key to solving this case. Detectives say the victim had just pulled into the lot to apply for some part-time work when a black woman between 45 and 50 years old came up to her. "Originally, the suspect approached her and said ‘Hey, I need some directions, I'm not from around here, could you help me?’ So being an nice person, the victim stops,” says Ret. Det. Myrle Carner with Crime Stoppers of Puget Sound. “All of a sudden the suspect opened up a purse and produced what was described as a brown gun.”

Detectives say the woman forced the victim to drive her Lexus -- which you see in the video leaving the parking lot -- to a bank in Tukwila. You also see who detectives think is the armed robber's accomplice follow them in the white Ford Escape. "Prior to the victim going into the bank, the suspect said ‘I have your phone, if you try to call 911, I will kill you,’” Carner says. Detectives say the victim was too scared to ask for help in the bank, so she brought the money out and gave it to the woman with the gun. Soon after, that suspect jumped out of the Lexus and ran to a blue car. She's described as black, 5’6”, 140 pounds with a medium build. She was wearing a black knit cap, blue jeans and a dark brown scarf. Detectives are asking for anyone who knows of a woman like that associated with this 2008 to 2011 white Ford Escape to give them her name. Maybe you know somebody who suddenly had a bunch of cash right after November 20th, which is when the victim was robbed. If you have any information that can help solve this case, call an anonymous tip into: CRIME STOPPERS: 1-800-222-TIPS You must call the Crime Stoppers hotline with your tip to be eligible to receive a cash reward for information leading to a fugitive’s arrest. Click here for information on how to text a tip to Crime Stoppers.