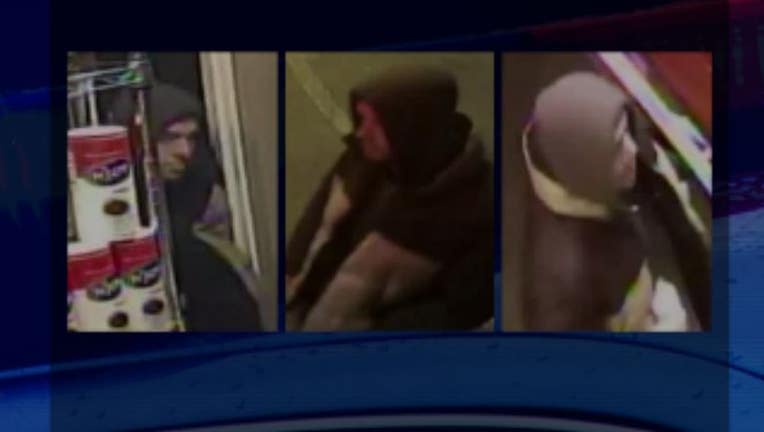 WANTED IN SEATTLE -- Seattle Police need your help identifying a pair of armed robbers who hit-up a bikini espresso stand on New Year's Eve. Take a look at the surveillance video: You see the main suspect in the black and beige coat walk up to the window and stick his head inside while a second suspect lingers behind him. The second suspect keeps his distance, so only his legs are caught on camera. It happened just after 6pm at ‘Ladybug Espresso" on 4th Ave S. You see him demand the barista to give him the cash and detectives say he threatened to have a gun. From a camera inside you see the barista collecting the money. You can't see her face, since we blur it for her protection, but know it's full of shock and fear as she gathers the bills. She hands him the money and he takes off running.

"He indicated, according to the victim, that he had a gun and she even went to the point where she saw his hand on something black that was tucked into his waistband and he informed her he had a gun, although none specifically was seen,” says Ret. Det. Myrle Carner with Crime Stoppers of Puget Sound. “She did the wise thing. She took it as a gun.” Detectives think the main suspect is white with a scruffy beard, mid 20's to 30's, about 6’0,” with a thin to medium build. If you can tell Seattle Police his name, call an anonymous tip into: CRIME STOPPERS: 1-800-222-TIPS You must call the Crime Stoppers hotline with your tip to be eligible to receive a cash reward for information leading to a fugitive’s arrest. CLICK HERE for information on how to TEXT A TIP to Crime Stoppers