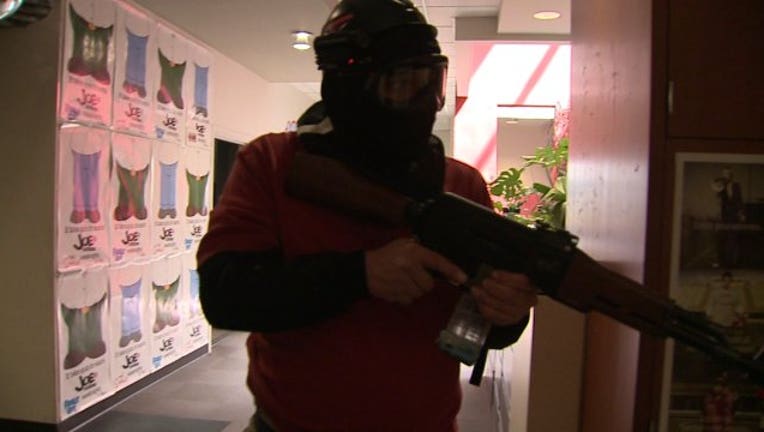 Scenes that used to only play out on movie screens are becoming real-life headlines as shooters target schools, malls and businesses across the country. While there is rarely any warning in these situations, there are ways to be better prepared. David Aykens owns Cascadia Tactical. He explains, “What we do is active shooter training. We teach civilians how to respond if the worst happens in their place of business.” His company stopped by Q13 Fox for a day of “shooter simulation training.” Our staffers were required to wear masks and other protection so the soap-filled bullets used during the drills would do minimal damage. Aykens holds up the ammunition and explains, “It’s just a little piece of plastic that pops out.” The first scenario started with little warning and was designed to see how we would react to hearing gunshots. Most of the staff scattered. One person who stayed at her desk was shot immediately. Others hid behind furniture and inside offices. The entire drill played out in under three minutes. The goal was to survive and be a good witness for police. “Happens pretty quick, doesn’t it?” asks Aykens as he takes his gear off and evaluates the staff. “How many of you remember what I was wearing when you called 911? What was your description? Julie Bateman works for Q13 and participated in the drill. She answers the question by saying, “Tall man with a red shirt. But I couldn’t tell anything else because I was across the room trying to see you and what was going on- then I heard the shot over here and said, ‘we’ve got a shooter’ and so at that point, that’s all that I knew.” Another Q13 Fox news employee Bridgette Turrell  says,   “I got under my desk. You fired a couple more shots,but I saw when you walked by that you were wearing tan pants and saw the bottom of your red shirt so that’s all that I could say.” Overall, we did pretty well. According to Aykens who praised the team for their swift action,“Great job. You scattered, you disappeared, I didn’t have any targets so well done.” For the next exercise, I played the role of someone who has a concealed carry permit and was armed at work. Just like before, the staff disappeared, but when the shooter found me, he took aim but I fired back. This scenario ended differently, but is a critical reminder of information needed when calling the police. “Anyone who has a concealed carry at work, if there are any of you, need to let police know, Parella Lewis explained. Otherwise, cops will treat anyone with a weapon as a possible suspect. Overall, the training helped us understand how important it is to think ahead about safety in case the unthinkable happens. “It’s kind of like a fire drill. You have to have a plan in mind as far as if you were going to run someplace else,” commented Q13 Fox news employee Darlene Tsao. And knowing your options ahead of time can make all the difference. Cascadia Tactical also has a program designed specifically for educators. They are the first company to offer simulation training to civilians. CLICK HERE if you're interested in getting training for yourself or your staff.