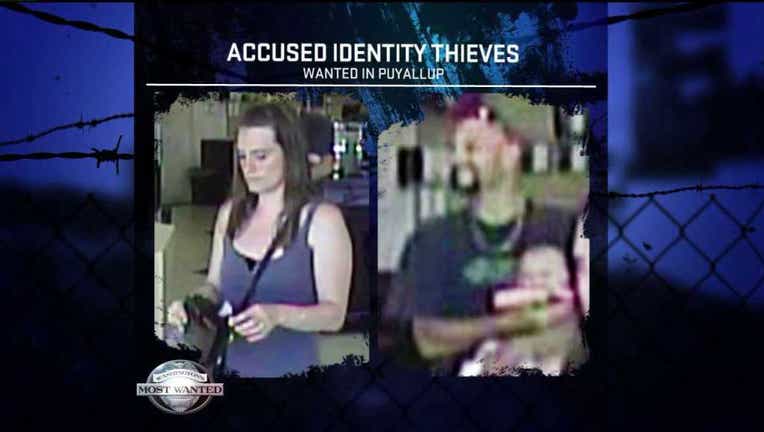 WANTED IN PUYALLUP -- Police want to know if you recognize this baby-carrying couple caught on camera at a pawn shop in Puyallup. The couple is accused of stealing a woman's ID and using it to sell stolen jewelry. The photos -- mostly of the woman -- were snapped at the "Pawn X-Change" on South Meridian. The woman sold stolen rings, while the guy was carrying the baby. Detectives think the couple are part of a bigger problem. “We always want to catch people who are doing identity theft, using stolen ID's and hocking stolen property, because these are people who are making their living doing this daily and that racks up a lot of victims, which in turn, racks up a lot of dollar loss. So, as soon as we get her caught, there's a good chance we'll unravel a whole ring of people who are stealing, selling and stealing ID's,” Pierce County Sheriff’s detective Ed Troyer said. Detectives said the woman is white and in her 20s with long brown hair. If you recognize either of these accused jewelry and ID  thieves, call an anonymous tip into: CRIME STOPPERS: 1-800-222-TIPS You must call the Crime Stoppers hotline with your tip to be eligible to receive a cash reward for information leading to a fugitive’s arrest. CLICK HERE for information on how to TEXT A TIP to Crime Stoppers