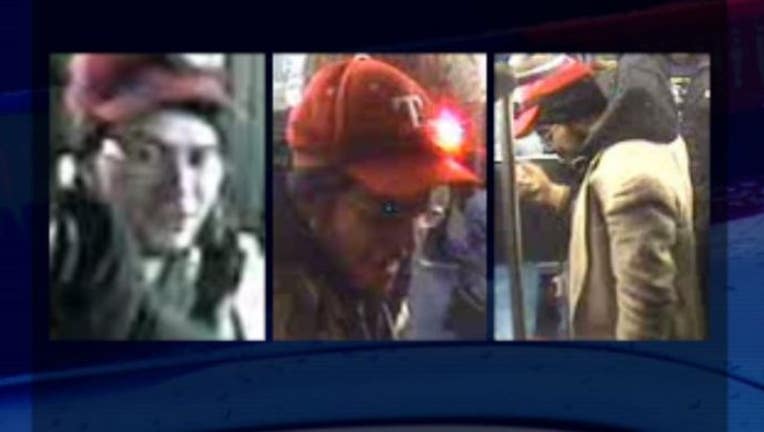 FUGITIVE UPDATE February 27, 2015 -- New video shows a headlight the bus groping suspect was wearing shining bright for riders to see. The video also shows him getting on the bus.

FUGITIVE WANTED IN KING COUNTY February 20, 2015 -- King County detectives need help identifying a suspect accused of groping a woman on a busy Metro bus. Camera's on-board the 120 Route that goes between Burien and downtown Seattle snapped photos of the suspect before he got away in November. Detectives say he struck after boarding the bus at the Burien Transit Center. "He started reaching over and grabbing her leg,” says Sgt. B.J. Myers of the King County Sheriff’s Office. “The victim told him to stop, asked him to move away, and he repeatedly did it a couple of times. When this lady decided to get up and go alert the bus driver, get out of the way, this guy groped her as she was walking away. That type of behavior's concerning no matter where it happens. It was about 6 o'clock in the evening, so it was a high traffic time on the bus. This guy was really blatant to be doing it at this time of night when a lot of people were on the bus, so obviously we're concerned about the aspect of this guy not really having any shame about what he was doing." The man wore glasses and a large tan coat. Detectives are really hoping his unique head wear combo that was topped-off with a red Texas Rangers hat stands out to someone who can help identify him. "It looked like he was wearing several hats on top of each other or maybe some type of scarf on top of a hat on top of another hat,” Sgt. Myers said. “So I don't know whether that's a particular look that this guy does often, but it definitely stood out to us when we were looking at the pictures." If you can tell King County detectives this accused groper's name, call an anonymous tip to: CRIME STOPPERS: 1-800-222-TIPS You must call the Crime Stoppers hotline with your tip to be eligible to receive a cash reward for information leading to a fugitive’s arrest. CLICK HERE for information on how to TEXT A TIP to Crime Stoppers