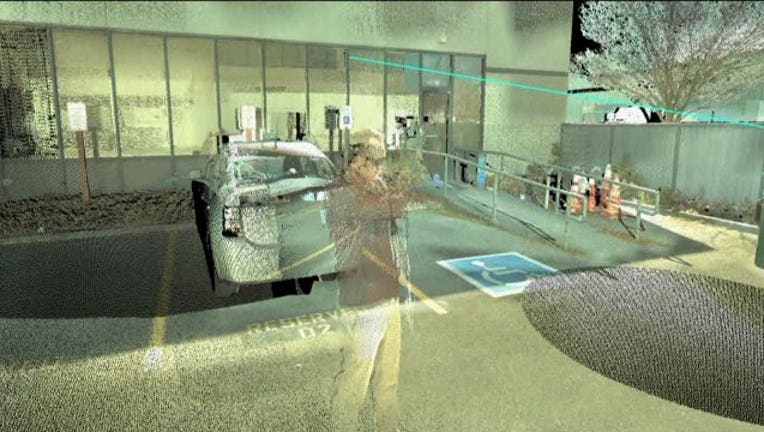 In Almost Human, the new hit FOX TV show airing Saturday nights, cops have robot partners and lasers mark off murder scenes instead of yellow tape. It's not that far-fetched when you see the machine already being used now to solve crimes in Washington state. "It's a game changer for us," said Washington State Patrol forensic scientist Kristopher Kern. The laser scanner creates 3D images of a crime scene, capturing more than a million pieces of information per scan. "Absolutely more accurate than a human being could do," he said. "What it does first is it scans using a laser, and then it takes images and it stitches those two together." Its measurements are accurate within two millimeters, so investigators and prosecutors can reexamine a crime scene with confidence and the click of a mouse. "We find often that we'll work a crime scene and then the prosecutor will have specific questions about something we didn't think of because he has the luxury of victim's statements and other facts that we may not have in the crime lab," said forensic scientist Rick Wyant. "We can go back to this scene later, to this big point cloud of data and be able to access individual items and tell him whatever he needs to know." In some cases, it can be the difference between life and death. "I think that the implications are really for the jury," Kern said. "We can freeze the crime scene forever. We can go back show any measurements, we can put witness viewpoints in there, we can virtually walk a jury through a crime scene." This 3D scanner has already been used in a dozen crime scenes since it arrived in Washington last November. The problem is, there's only one machine for the whole state. "It's a bit of a logistical nightmare when you've got a major crime scene in Spokane and this is stationed in Seattle," said Kern. "Especially in the winter months it can take us 5-7 hours to get it over the pass and at the crime scene." A grant paid for the scanner which can cost up to $175,000, but investigators hope to get another one. "It's not ideal, but in the age of doing more with less it's just what we have to deal with until we can find a way to get another one," he said. With visuals and accuracy like this, Kern believes they are well worth the cost. "These devices are going to be more cost-effective in the future and it will be probably a requirement in the near future," Kern said. It takes 80 hours of training to use this high-tech scanner. It's being used in court this week -- for the very first time in Washington state.