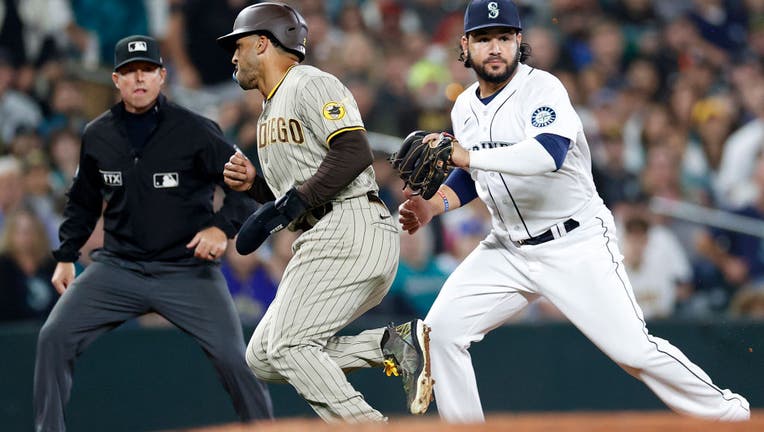 SEATTLE, WASHINGTON - SEPTEMBER 13: Trent Grisham #2 of the San Diego Padres is tagged out by Eugenio Suarez #28 of the Seattle Mariners during the seventh inning at T-Mobile Park on September 13, 2022 in Seattle, Washington. (Photo by Steph Chambers

SEATTLE - Going up against a team he’s seen only once in the past five seasons, San Diego’s Yu Darvish had to do some extra homework in his prep getting ready to face the Seattle Mariners.

Challenging? Actually, the opposite.

"Actually, it’s more fun because you haven’t seen these guys and you’re digging in," Darvish said through an interpreter. "So it’s more fun for me."

The results backed up the work Darvish put in as he limited Seattle to two hits over eight inning, and the Padres beat the Mariners 2-0 on Tuesday night.

Wil Myers provided the primary offensive highlight with an RBI double, but this night was all about the Padres right-hander on the mound.

Major League Baseball is introducing some of its most radical rules next season, adopting a pitch clock and limiting defensive shifts after concluding modern analytics created a slower, less entertaining sport.

"I mean, every pitch was working," San Diego catcher Austin Nola said. "I can’t think of a pitch that he didn’t throw for a strike. He threw every pitch for a strike I think he had in his arsenal."

Darvish pitched at least eight shutout innings for the eighth time, but the first since June 28, 2014, against Minnesota when he was pitching for Texas.

San Diego stayed two games ahead of Milwaukee in the chase for the final wild card spot in the NL, while Seattle dropped into a tie with Tampa Bay a half-game behind Toronto in the AL race for the top spot.

"When you are coming down to end of the season, there’s 20 games left you know exactly where you stand," Padres manager Bob Melvin said. "There’s a bit more to every game and then when they’re tight like that even more so."

Before the game against the White Sox on Wednesday, Seattle Mariners pitcher Marco Gonzales and his wife Monica unveiled their own signature red blend wine.

Darvish (14-7) needed just 94 pitches to get through the eight innings. He struck out seven and the only batters to reach base came on Eugenio Suárez’s single in the first inning and Ty France’s base hit leading off the seventh.

In between, Darvish retired 16 straight batters and handed Seattle its first shutout since June 19 when the Mariners were stymied by the Angels and dropped to 29-39. Seattle had scored in 72 straight games.

"You don’t always hit him where they aren’t," Seattle manager Scott Servais said. "You’ve got to give Darvish credit. He kept the game in check."

Darvish also had some good fortune that several hard-hit balls by the Mariners seemed to die on the warning track on a chilly night. Darvish has pitched at least six innings in 25 of 27 starts this season and has struck out at least five batters in 17 straight.

Darvish said he felt it was "50/50" whether he’d get a chance at a complete game. Melvin turned to Josh Hader — who entered with a 13.50 ERA in 11 appearances since being traded to San Diego. Hader gave up a two-out single to Julio Rodríguez in the ninth, but struck out Ty France using a change up to end a 10-pitch at-bat and pick up his third save with the Padres.

"When you’re throwing fastball after fastball, and you get in foul ball after foul ball, you get a little bit creative," Melvin said. "(He) threw a pitch that (Nola) put down, ended up winning the game with it."

Seattle starter Logan Gilbert (12-6) allowed only four hits but he was done after five innings due to an inflated pitch count. Gilbert threw 107 pitches to get through the fifth before turning over to Seattle’s bullpen.

The only damage against Gilbert came in the fourth inning when Jake Cronenworth reached on an infield single and with two outs Myers lined a double into the left field corner. Seattle wasn’t able to make a clean relay and Cronenworth scored without a throw.