The Western Washington University women's basketball team will play for a NCAA Division II National Championship for the first time in program history Friday night after a 74-68 victory over top-seeded North Georgia in the Final Four.

Sophomore forward Brooke Walling scored a team-high 19 points with senior guard Emma Duff adding 18 in their victory over the Nighthawks on Wednesday night in Birmingham, Ala.

"It's been a lot of fun for us, obviously," junior guard Monique Fierke said. "Lots of traveling. That's been really fun. We've gotten really close with each other. I think we've just really enjoyed this as a team together. It's pretty special that we get to experience that, and we're excited to see what comes."

The Vikings (25-5) won the regular season title in the Great Northwest Athletic Conference. After victories over conference rivals Alaska Anchorage and Central Washington in the first two rounds of the NCAA Tournament, WWU secured the West Region berth in the D-II Elite Eight with a 73-59 victory over Cal State East Bay.

Western Washington quickly found themselves in a 13-1 hole early in their matchup against Valdosta State in the Elite Eight. However, the Vikings rallied and took a lead into halftime. The game remained close throughout with the Vikings gutting out a 58-55 victory to advance to the Final Four. They trailed again by eight in the first quarter of their victory over the Nighthawks before a 9-0 run early in the third quarter put them in control.

Walling scored a team-high 19 points with Emma Duff adding 18 in their victory over the Nighthawks.

"I think we just have a really good understanding of what we need to do in times like those," Walling said of the team's resiliency when trailing. "We do a really good job of regrouping, coming together, figuring out what we need to change and making that change. I think that's something we've really worked on all year and at the end of the day I think it's what's carried us so far into this postseason run."

The Vikings may not be able to afford such a circumstance against Glenville State. The Lady Pioneers have been an offensive juggernaut all season. They've scored at least 100 points in 12 games this year and have won their last two games in the tournament by 47 points over West Texas A&M and 24 points over Grand Valley State.

"They're just a super fast-paced team," Walling said. "They love to drive, but they can also shoot the 3-(pointer). Realistically, we have to limit their transition, just make sure we're staying in front on their drives and getting out on shooters."

The Vikings had early foul trouble in their victory over North Georgia to advance to the title game. With a potent offense on the other side, the Vikings known they need to avoid foul trouble and be on top of their game defensively.

"We pride ourselves on (our defense), getting stops when we need to get stops," Fierke said. "And on the other end, just playing together. We've really bought into the fact that it takes everyone out there on the floor or on the bench and we're constantly subbing. Trusting our coaches, trusting each other, and really just having fun. That's something we've been emphasizing too."

Western Washington had made two previous trips to the Final Four since joining the Division II level in 1998. The Vikings lost 80-74 to Northern Kentucky in 1999-2000 and 66-54 to Ashland in 2012-13 in their previous two trips to the Final Four. The men's team won their national championship a decade ago with a 72-65 victory over Montevallo. Walling, Fierke and the rest of the Vikings hope to join them in raising a trophy for the school on Friday night.

"It feels really good to put on a Western jersey no matter what day it is whether it's practice of the national championship," Fierke said. "I feel super grateful to be a part of this. It feels really amazing and it feels really great to be surrounded by such strong women day in and day out. Us being the first team to have done this, it means a lot and it means we're carrying on a legacy and continuing to be strong women and that's really special to us."

The championship game tips off at 5 p.m. PT from Birmingham Crossplex on CBS Sports Network on Friday night. 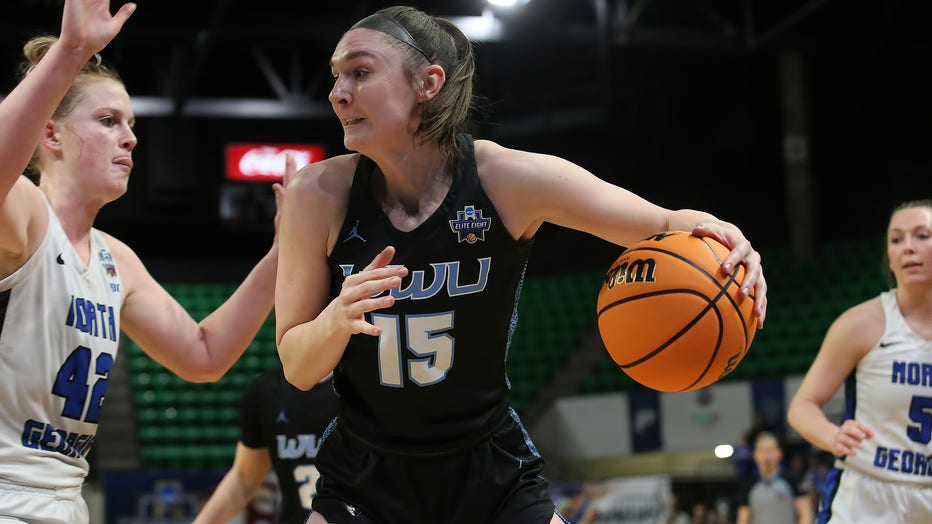 Brooke Walling (No. 15) of Western Washington University dribbles against Julianne Sutton (No. 42) of North Georgia in the Final Four of the Division II Women's Basketball Tournament on March 23, 2022 in Birmingham, Ala. (photo by Michael Wade / Western Washington Athletics)