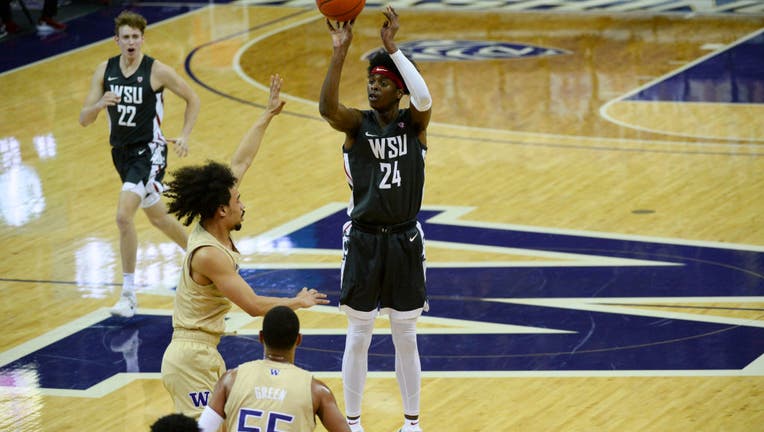 Washington State guard Noah Williams announced via his instagram account that he is leaving the Cougars to transfer to the University of Washington.

Williams, 21, played the last three seasons at Washington State before electing to transfer to their cross-state rival. Williams averaged 9.5 points game this season for the Cougars.

Williams is a Seattle native and went to high school at O'Dea and helped the team win the 3A state championship as a senior in 2019. Williams' dad, Guy Williams, played two years of college basketball for the Cougars and Noah followed in his dad's footsteps to Pullman.

However, Williams put his name into the transfer portal this offseason and will play for the Huskies instead this winter.

"First and foremost, I would like to thank God for blessing me with the opportunity and ability to wake up and play the beautiful game of basketball each day," Williams said on entering the portal last week. "From the bottom of my heart I would like to thank Coach Smith and the entire WSU Cougar family for showing me nothing but love and support my last 3 years out here in Pullman

"A huge thank you to all my family, friends and teammates for the unconditional love and support that you have given me from day uno! With that being said I am entering my name into the transfer portal."

Williams averaged 11.7 points per game on 42.4 percent shooting from the field and a standout 37.9 percent on 3-pointers in 2020-21 for the Cougars. His percentages fell back to 36.4 percent and 26.2 percent, respectively, last year at Washington State.

Williams joins prep commitments Koren Johnson of Garfield High School and Tyler Linhardt of King's as additions for the Huskies for 2022-23. Johnson and Linhardt are the top two high school players in the state of Washington, per 247Sports.com.  Keyon Menifield Jr, a Flint, Mich. native playing for PHH Prep in Phoenix, is the third member of Washington's 2022 recruiting class.