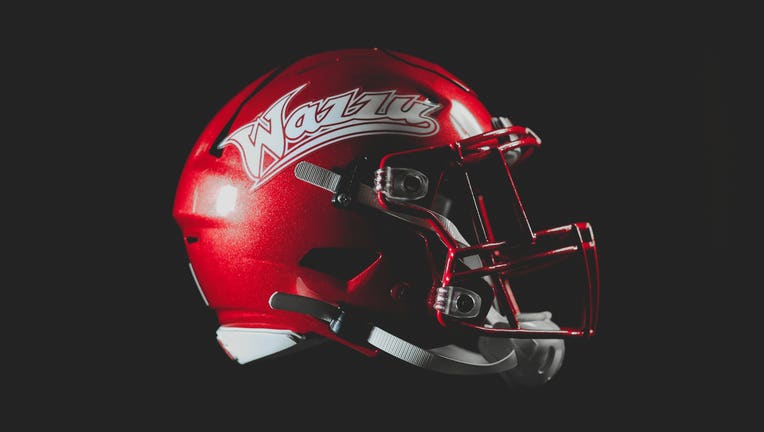 PULLMAN, Wash. - Washington State will take on No. 14 ranked Utah at Martin Stadium on Thursday, and the Cougars will be wearing their new "Wazzu" helmets.

At around 8:30 a.m., Washington State Football's Twitter account posted a teaser video of the new helmet with the caption, "Wanted to ask you guys something before tonight's game… Y'all mind if we wear these?"

The design appears to draw inspiration from their "Cougars Script", which WSU fans have seen before. However, the team will be donning the school's moniker on their helmets during Thursday night's game; "Wazzu Script".

Both teams are coming off a bye week, but headed in different directions. Utah, the defending Pac-12 champs, beat then-No. 7 Southern California 43-42 on Oct. 15. Washington State lost at Oregon State on Oct. 15, their third loss in the past four games.

Utah: QB Cameron Rising led a 75-yard scoring drive in the fourth quarter to top the previously unbeaten Trojans. Rising has passed for 1,855 yards and 15 touchdowns this season, adding 308 yards on the ground and six rushing TDs. RB Tavion Thomas, whose status for Thursday is uncertain, has 414 yards and five touchdowns for a Utah ground game that averages 192 yards per game and leads the conference with 19 touchdowns. TE Dalton Kincaid has caught 39 catches for 558 yards and six touchdowns.

Washington State: The offensive line has been unable to protect QB Cameron Ward lately, giving up 11 sacks in the past two games. Coach Jake Dickert responded by revamping the offensive line.

Washington State has allowed 26 sacks this season, ranking among the nation’s worst FBS teams. Utah’s defense allowed 42 points and more than 500 yards in each of its past two games. Washington State’s rushing attack has been the least productive in the Pac-12, averaging just 89 yards per game, 20 fewer yards per game than 11th-place Colorado. Rising has taken just five sacks all season.