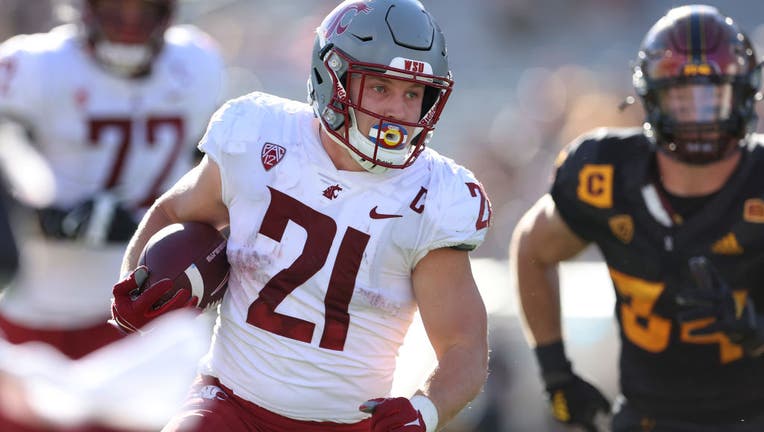 TEMPE, ARIZONA - OCTOBER 30: Running back Max Borghi #21 of the Washington State Cougars rushes the football against the Arizona State Sun Devils during the second half of the NCAAF game at Sun Devil Stadium on October 30, 2021 in Tempe, Arizona. (Ph

The third week of October is when it could have all fallen apart at Washington State. There were easy built-in reasons and explanations if the Cougars had crumbled at that point of the season.

Instead, their resolve became their strength. The Cougars were not going to let the situation surrounding former head coach Nick Rolovich be the definition of their season.

Because of that resiliency, Washington State finds itself still with a chance at winning the Pac-12 North Division going into Friday’s Apple Cup showdown with Washington. The Cougars are already bowl eligible and will play in a bowl game for the sixth straight season, not counting the COVID-19 shortened 2020 season.

But if the Cougars can snap a seven-game losing streak to Washington and Oregon State beats Oregon on Saturday, Washington State (6-5, 5-3 Pac-12) would be the North Division representative in the Pac-12 championship game opposite Utah.

Ultimately that scenario becoming reality begins with the Cougars taking care of their own business against the Huskies. But even the possibility is unexpected considering where the Cougars were at barely a month ago.

"We understand the position we’re in and what we can do," Washington State linebacker Justus Rogers said. "But we just got to focus on this week and then let the chips fall where they may as far as that goes."

Interim head coach Jake Dickert has put himself in position for the permanent job with the Cougars after stabilizing the program following Rolovich’s dismissal for refusing to follow the state’s COVID-19 vaccine mandate.

Washington State has gone 2-2 since Rolovich’s firing and last week’s 44-18 rout of Arizona ensured bowl eligibility. Now comes trying to end the long skid to the Huskies. Their previous win over Washington was 2012. Their most recent win at Husky Stadium: 2007.

"I think you can put unneeded pressure on understanding the pressures of the past or what’s happened in the past," Dickert said. "This is our moment, the ’21 team. We’re trying to be 1-0."

Washington (4-7, 3-5) won’t be going to a bowl game, ensured of its first losing season since 2009 after a dramatic freefall. Washington started the season ranked No. 20 in The AP 25 preseason poll and will end with the school in the midst of its own coaching search.

Bob Gregory will lead the Huskies for a third game as interim coach following the suspension and subsequent firing of Jimmy Lake. While Washington has played hard in losses to Arizona State and Colorado, there were numerous mistakes in both games that ended the Huskies hopes of a postseason trip.

Last year was the first time since 1944 that schools didn’t play. Issues with COVID-19 cases within the Cougars program led to the game being cancelled. Because of the cancellation and the coaching moves this season, neither Rolovich nor Lake — both hired before the start of the 2020 season — ever served as a head coach in the Apple Cup.

Washington State running back Max Borghi had a memorable final home game for the Cougars last week. Borghi rushed for a career-high 139 yards and two touchdowns in the win over Arizona. The combo of Borghi and Deon McIntosh would seem to have chances for a big game against the Huskies. Washington ranks 109th in the country in giving up 192.2 yards per game on the ground.

It’s been a tough second season as the starting quarterback for Washington’s Dylan Morris. There’s been a clear regression from what Morris showed during the shortened 2020 season and a running list of mistakes that have cost the Huskies in several games.

With Morris struggling and bowl eligibility no longer possible, the Huskies are expected to have highly touted freshman Sam Huard on the field against the Cougars. Huard has seen limited snaps in three previous games this season.

The Hobert name is quite familiar to fans of the Apple Cup, but has a different twist now. Joey Hobert is a sophomore wide receiver for the Cougars and last week had two blocked punts against Arizona, one of which went for a safety. He’s the son of Billy Joe Hobert, who played at Washington for three seasons and was the starting quarterback for the 1991 co-national championship team.

"Apple Cup obviously has been a huge part of my life from the other side, but I’m glad that I’m with the Cougs this time," Hobert said.