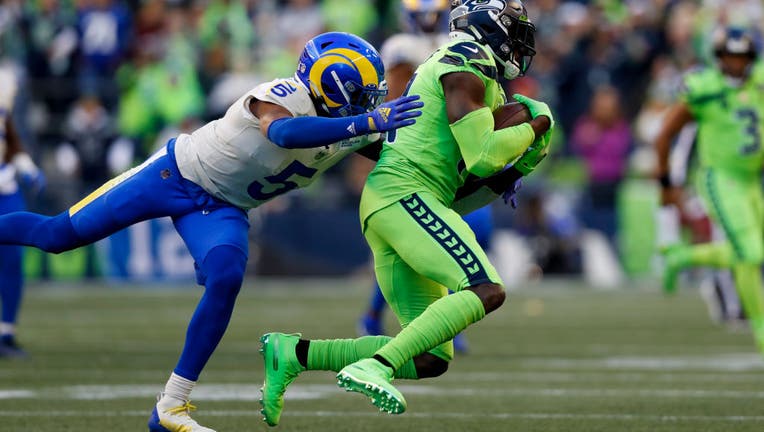 SEATTLE - All the focus will be on the health of Russell Wilson’s right middle finger and whether the injury that knocked him out of Seattle’s 26-17 loss to Los Angeles Rams will keep him from starting for the first time in his career.

In a league driven by quarterbacks, that is going to get the attention.

But there’s a bigger issue for the Seahawks that needs a more immediate fix. Seattle’s defense is on a record pace for futility that has resurrected nightmares from the start of last season, when it also was giving up huge chunks of yards and points.

Pete Carroll said Friday their players must be better at recognizing what’s coming and following through with the designed schemes. But the numbers posted so far are staggering.

"When the opportunity (comes) to make a decision on how you play it, we got to make the right one," Carroll said. "When we’re seeing stuff and we’re aggressively going after it and stuff is getting in around us and behind us, that’s just an area that we just have to be more disciplined."

Los Angeles became the fourth straight team to post at least 450 total yards against the Seahawks. The Rams had 301 yards and 23 points in the second half, the turning point seeming to come on DeSean Jackson’s 68-yard reception on third-and-10 when he blew past Sidney Jones and made a quicker adjustment than Jamal Adams.

The four straight games allowing 450 or more yards is tied for the longest streak in league history. Cincinnati had it happen in 2018 and 2019; Buffalo in 2011. Otherwise, it’s back to the 1950 Baltimore Colts to find another occurrence.

Seattle is giving up 450.8 yards per game, almost as bad as last season when the Seahawks gave up 456 yards a week through the first eight games before making a turnaround.

"I’m really disappointed that we’re off to a start statistically that looks like garbage. We’re better than that," Carroll said.

Give Seattle’s offensive line some credit. Against a Rams’ defensive front that’s been problematic in the past, the Seahawks offensive front did the job. Wilson was sacked twice and one of those was clearly his mistake. And the group worked well providing time for backup Geno Smith in the fourth quarter as he tried to rally the Seahawks after replacing Wilson.

Most of the attention is on the pass defense because of the big numbers posted by Matthew Stafford on Thursday. But the run defense continues to be problematic and has amplified the overall defensive issues. Seattle was already 32nd in the league in yards rushing allowed and watched the Rams combo of Sony Michel and Darrell Henderson rush for 119 yards averaging 4.25 yards a carry.

Seattle has yet to hold an opponent under 110 yards rushing.

"We’ve got (stuff) we need to fix and everyone knows that," safety Quandre Diggs said.

Smith always wanted another chance to be a starter in the NFL. He may get the opportunity depending on the status of Wilson. Smith looked great coming off the bench in the fourth quarter, completing 10 of 17 passes for 131 yards. He led a 98-yard touchdown drive on his first series and took the Seahawks to a field goal on their next possession. His chance at leading a winning drive faltered when Tyler Lockett tumbled on his break and Smith threw an interception with 2:02 remaining.

Adams continues to be the picture of all that’s going wrong with Seattle’s defense even if there is plenty of fault to go around. He hasn’t played well and had two very noticeable misplays against the Rams — the underthrown ball to Jackson and getting beaten by Tyler Higbee for a touchdown.

Adams isn’t alone among Seattle’s defensive woes, but as the highest-paid safety in the league the attention will start with him.

Seattle had no injuries other than Wilson coming out of the game. There is uncertainty when Chris Carson (neck) will be able to return. The Seahawks will have TE Gerald Everett back next week off the reserve/COVID-19 list. Everett tested negative for a second time on Thursday but his test wasn’t received in time for him to be activated against the Rams.

68 — Michael Dickson’s wild double-punt in the second half also became his longest punt of the season at 68 yards. It’s also tied for the longest punt in the league this season. His previous long for the year was 66.

The biggest question for Seattle will be determining Wilson’s status ahead of next Sunday’s game at Pittsburgh. It’s the beginning of a three-game stretch when Seattle could use three wins to stay relevant in the NFC West with a challenging November on the horizon.

The Seahawks have the benefit of a long weekend to see where Wilson is at with his finger and make plans moving forward either with Wilson under center or Smith.