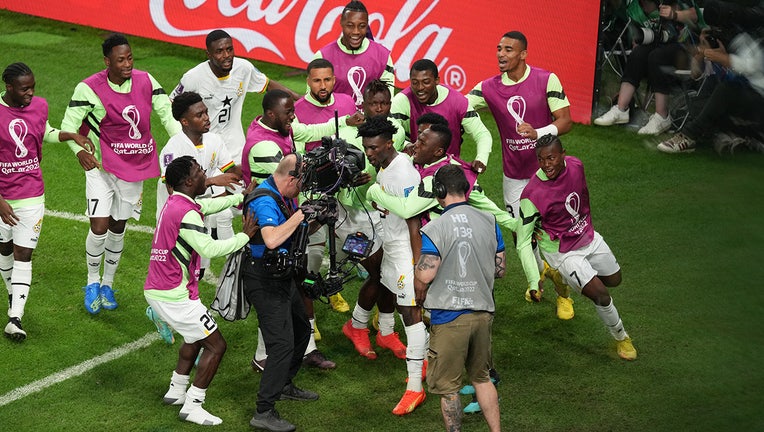 DOHA, Qatar - The second week of the World Cup continued Monday, as Ghana fended off a South Korea rally, Cameroon staged an impressive comeback in a 3-3 draw against Serbia, Cristiano Ronaldo celebrated a goal that was eventually awarded to a teammate, and Brazil overcame the absence of their injured star to beat Switzerland.

Meanwhile, the Americans play Tuesday in a must-win game against Iran.

RELATED: For the USMNT, the knockout round has arrived early 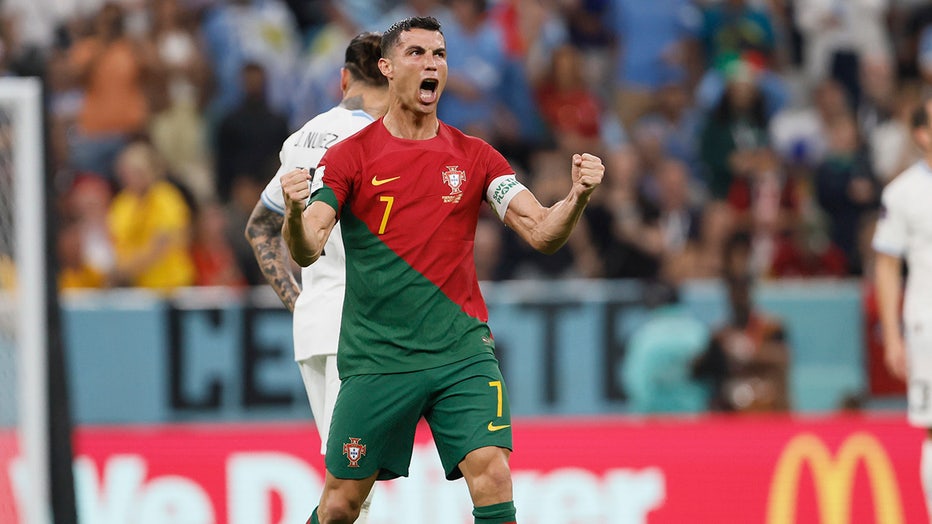 Cristiano Ronaldo thought he scored but the goal was eventually credited to Bruno Fernandes in Portugal’s 2-0 win over Uruguay on Monday, a result that secured the team a place in the last 16 of the World Cup.

Fernandes curled in a cross from the left that barely went over the head of Ronaldo and bounced into the far corner of the net in the 54th minute to give Portugal a 1-0 lead.

Ronaldo wheeled away in celebration, believing he had scored his ninth World Cup goal and second of this year’s tournament.

After repeated close-up replays, it was awarded to Fernandes, who added a second goal from the penalty spot in stoppage time after a handball by Jose Maria Gimenez.

It was a second straight victory for Portugal, which became the third team to reach the last 16 after France and Brazil.

Uruguay has one point from two matches and needs to beat Ghana on Friday to stand a chance of advancing.

The match was briefly interrupted just before the goal by a protestor carrying a rainbow flag and wearing a blue Superman T-shirt that said "SAVE UKRAINE" on the front and "RESPECT FOR IRANIAN WOMAN" on the back.

Security officials chased the person down and the flag was dropped on the field. 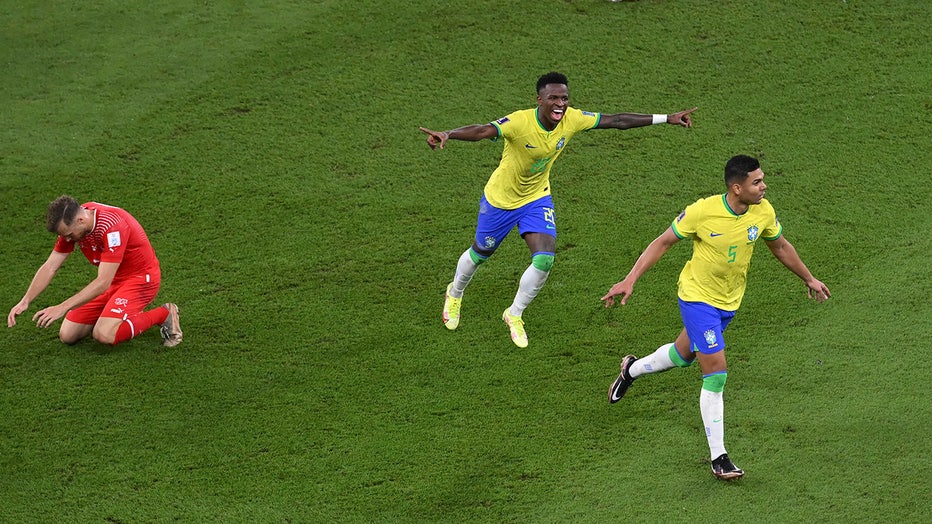 Casemiro of Brazil celebrates after scoring a goal during the FIFA World Cup Qatar 2022 Group G match between Brazil and Switzerland at Stadium 974 on November 28, 2022 in Doha, Qatar. (Photo by Stephen McCarthy - FIFA/FIFA via Getty Images)

Struggling and unconvincing without Neymar on the field, Brazil still played well enough to secure a spot in the next round of the World Cup.

The five-time champions overcame the absence of their injured star to beat Switzerland 1-0 with a late goal Monday and make it to the round of 16 with a match to spare in Group G.

"Of course we miss a player like Neymar," Brazil coach Tite said. "The team loses a lot without him. But we also have other players who can get the job done, as we saw it today."

Defensive midfielder Casemiro got the only goal in the 83rd minute of a game in which Brazil had difficulties creating scoring chances without its main playmaker. The Real Madrid player scored with a one-timer into the far corner, using the outside of his right foot for a shot that deflected slightly off defender Manuel Akanji.

"We knew that it wasn't going to be easy. We had to be patient," Casemiro said. "Out first objective was to advance and we achieved that."

Neymar stayed at the team’s hotel to treat a right ankle injury sustained in the opener in Qatar. He posted an Instagram story showing him watching the match on television while undergoing treatment on his foot.

"Casemiro has been the best defensive midfielder in the world for a long time," Neymar wrote on Twitter.

Team doctors have not yet given a timetable for Neymar's return — or said if he will return at all.

"We know that Neymar is a great player and that he makes a difference," Brazil defender Marquinhos said. "In difficult moments he takes on the responsibility and creates the opportunities, but we showed once again that we have quality players to make up for his absence."

The win gave Brazil six points from two matches, leaving Switzerland with three. Serbia and Cameroon, which drew 3-3 earlier Monday, have one point each.

Switzerland, which had no attempts on target, needs a win in the last match against Serbia to guarantee its spot in the next stage. A draw may be enough depending on the match between Brazil and Cameroon.

The result extended Brazil’s unbeaten run in the group stage to 17 matches, with 14 wins and three draws. It has lost only one of its last 29 group games, with the last defeat coming against Norway in 1998 in France.

Switzerland had lost only two of its last 13 group matches at the World Cup. 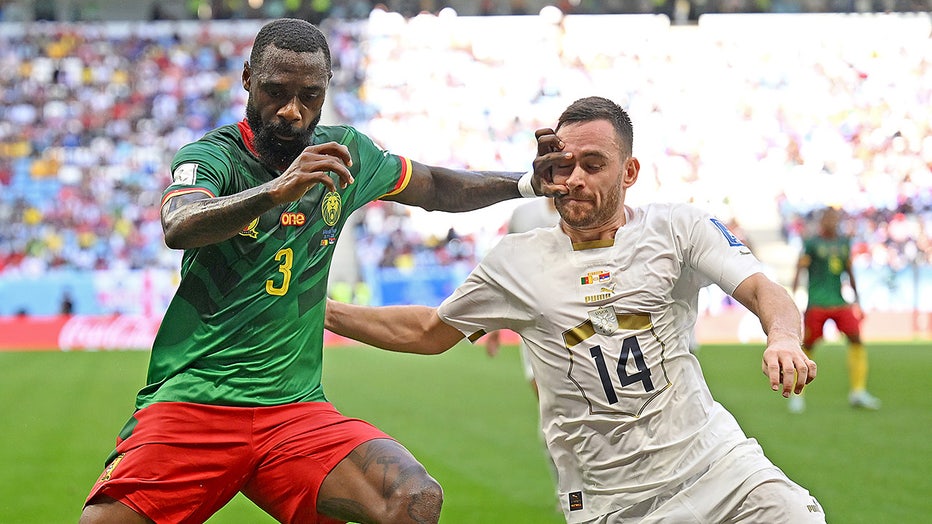 Nicolas Nkoulou of Cameroon controls the ball under pressure of Andrija Zivkovic of Serbia during the FIFA World Cup Qatar 2022 Group G match between Cameroon and Serbia at Al Janoub Stadium on November 28, 2022 in Al Wakrah, Qatar. (Photo by Clive M

Cameroon staged an impressive comeback in a 3-3 draw against Serbia at the World Cup despite dropping its goalkeeper at the last minute.

Andre Onana, who plays for Italian club Inter Milan, wasn’t in Cameroon’s lineup or even at the stadium to watch the Group G match. Coach Rigobert Song said he dropped his starting goalkeeper for "disciplinary reasons," but didn’t give any specifics.

Cameroon was down 3-1 but second-half substitute Vincent Aboubakar turned the game with a goal and an assist. 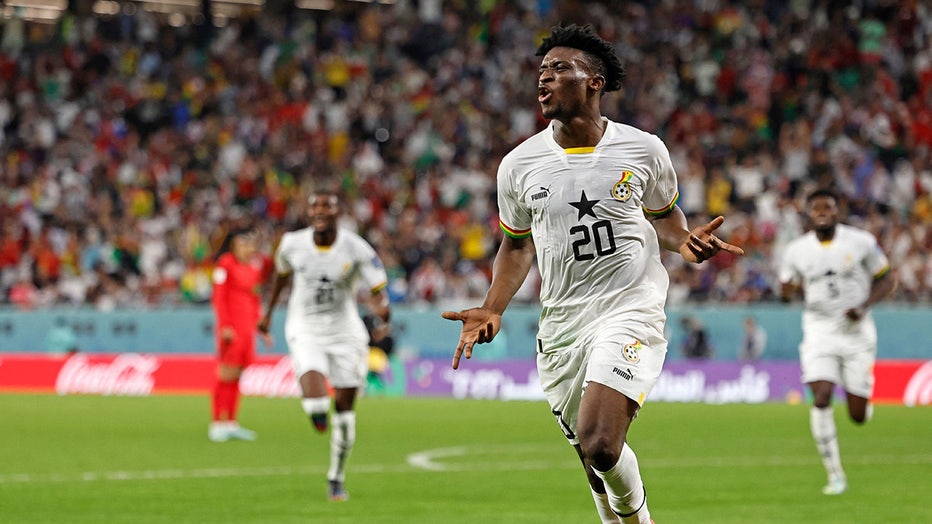 Mohammed Kudus said there wasn’t much difference between the way Ghana played in its opening World Cup match against Portugal or its second game against South Korea.

Except the result, of course.

Kudus scored twice, including the go-ahead goal after the South Koreans evened the match in the second half, and Ghana staved off elimination with a 3-2 victory on Monday.

Mohammed Salisu also scored for the Black Stars, who were disappointed after a close 3-2 opening loss to Cristiano Ronaldo and Portugal and were in need of points against South Korea for a chance to reach the knockout round in Qatar.

"I think the game against Portugal was one of the best games you can have. The energy and the commitment from the whole team was good. So we approached this game the same way," Kudus said. "We have the same mentality game after game after game, so we are going in the same direction with the same energy no matter who we play."

Down 2-0, Cho Gue-sung scored both of South Korea's goals about three minutes apart early in the second half to even the game at 2-2.

But Kudus’ low left-footed goal in the 68th minute sailed out of the reach of goalkeeper Kim Seung-gyu to give the Black Stars back the lead. Ghana goalkeeper Lawrence Ati-Zigi preserved the victory with a leaping save off Cho’s attempt in stoppage time.

"We conceded goals a bit early in the game, and that forced us to play a chasing-style game that wasn’t easy. After the first half, we vowed to keep trying until the end," Cho said. "We never gave up and eventually caught up (to them), but the last goal we conceded was regrettable. We kept pounding for an equalizer but couldn’t break through."

South Korea forward Son Heung-min remained without a goal in Qatar. The Tottenham forward wore a mask to protect a broken left eye socket he sustained in a Champions League game against Marseille earlier this month.

South Korea coach Paulo Bento was handed a red card in the moments following the match after a heated exchange with English referee Anthony Taylor. The Portuguese coach was furious when South Korea won a corner at the end of 10 minutes of stoppage time but the whistle was blown before it could be taken.

The red card means that Bento will not be on the sideline for South Korea's final match against Portugal on Friday.

Assistant coach Sergio Costa said "the result at the end was totally unfair" and added that he did not hear Bento say anything "inappropriate."

South Korea played to a 0-0 draw in its opener with Uruguay. The team was making its sixth straight World Cup appearance.

But now the South Koreans are in danger of elimination. Costa suggested the anger of Bento would unite the team.

"Count on us for the next match," he said.

Ghana became the third African nation to make it to the World Cup quarterfinals at the 2010 tournament. Black Stars captain Andre Ayew was also on that squad. No African team has reached the World Cup semifinals.