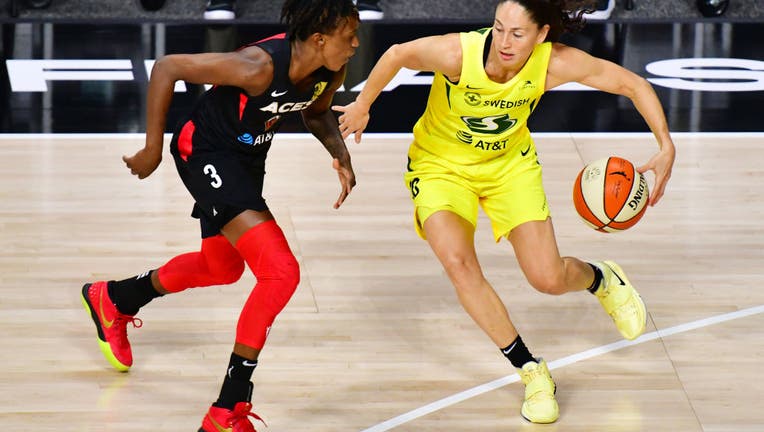 With one week left in the WNBA regular season, there’s still a lot to be decided as far as the postseason goes.

Six teams have clinched spots in the playoffs that begin next week, although none of the seeds has been locked up just yet.

Chicago is in the driver’s seat for the No. 1 overall seed, just needing a combination of two more wins or Las Vegas losses to seal home-court advantage through the playoffs. The defending champions are looking to be the first to repeat since Los Angeles did it in 2001-02.

Las Vegas and Connecticut are battling for the No. 2 seed and potentially home court in their semifinal series if both advance. The Seattle Storm and Washington Mystics sit a half game apart in the standings for the fourth and fifth seeds.

Dallas may be the only team that really has locked in its spot, clinching a playoff berth on Monday night. The Wings have won five straight and most likely will be the sixth seed.

The final two spots are totally up for grabs with five teams vying for them. Only one game separates seventh place Atlanta from No. 11 Los Angeles with all five teams having three games to play each this week.

2. Las Vegas (23-10): Coach Becky Hammon returned Dearica Hamby to the bench to try and get the league’s perennial Sixth Woman of the Year back into her comfort zone.

3. Connecticut (22-11): The Sun added Odyssey Sims for the stretch run and she’s already made an immediate impact giving Connecticut another strong defensive guard.

4. Seattle (20-13): The Storm lost Sue Bird’s last regular-season home game, but have bigger goals in mind and securing the No. 4 seed would definitely help them.

5. Washington (20-14): The Mystics dropped two in a row and don’t hold the tiebreaker with the Storm so will need to finish ahead of them in the standings to earn home court in the opening round.

6. Dallas (17-16): The Wings have been playing their best basketball the past two weeks and doing it for the most part without Arike Ogunbowale, who has been sidelined with an ankle injury and then a hip issue.

7. Minnesota (13-20): The Lynx got a much-needed boost with the return of Napheesa Collier, who came back to the team less than three months after giving birth to daughter Mila.

8. Phoenix (14-19): The Mercury’s potential run to the playoffs will be without star Diana Taurasi, who will miss the final week of the season with a quad injury that sidelined her for the past few games.

9. Atlanta (14-19): The Dream had one of the biggest improvements from last season and two wins in their final three games would double their victory total from last year.

10. New York (13-20): The Liberty dropped key games to Phoenix and Dallas and will most likely need to win at least two of their final three games to have a chance to make the postseason for a second consecutive year.

11. Los Angeles (13-20): A victory over Washington to close out a rough East Coast trip kept alive the Sparks’ playoff hopes.

12. Indiana (5-29): The Fever would love to win one of their final two games to end a 16-game skid and have some positive momentum heading into the offseason.

Teaira McCowan of Dallas was voted the AP Player of the Week. She averaged 18.5 points, 12.8 rebounds and shot 56% from the field to help the Wings win all four of their games. Rhyne Howard of Atlanta and Sabrina Ionescu of New York also received votes.

The Los Angeles Sparks had a rough end to their road trip, getting stuck at a Washington airport overnight after their flight was delayed a few times and finally canceled.

WNBA players’ association president Nneka Ogwumike took to social media early Monday morning to bring light to the problem and then called upon the league to come up with a solution moving forward.

"We reiterate our standing invitation to the league and team ownership to work together to identify a manageable solution to this problem whose origins are complex, but remedy simple," Ogwumike wrote. "It is time to permit teams to invest in charter flights between games, beginning with the entire 2022 WNBA playoffs, and continuing with a common sense, full-season solution beginning in 2023."

The WNBA does not have chartered flights due to prohibitive costs, league commissioner Cathy Engelbert has said many times. Engelbert did say at the All-Star Game last month that the league would charter flights in the WNBA Finals.

GAME OF THE WEEK

Seattle at Minnesota, Friday. A huge game for both teams in their playoff hunt, but also the final regular-season home contest for Sylvia Fowles.