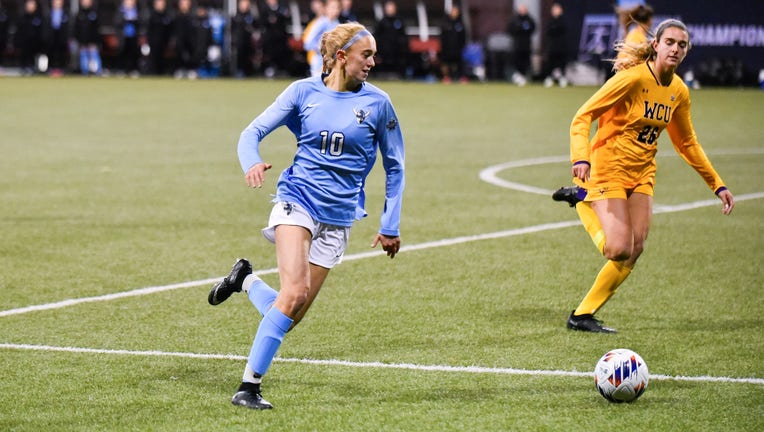 Claire Potter (No. 10) of Western Washington University prepares a shot on goal that would beat All-American goaltender Hayley McGee in the 83rd minute to give the Vikings a 2-1 victory over West Chester University in the Division II National Champio (photo by Michael Potash / WWU Athletics)

Potter's offering from just right of the 18-yard box sailed over the head of West Chester's All-American goaltender Hayley McGee into the net to serve as decisive tally in the Vikings' second national championship in the last six seasons.

"My goal in that moment was just to create another chance," Potter said. "I sprinted after it and tried to chip the keeper - whether somebody else was going to get on the other end of it or not - and it ended up in the back of the net."

Potter, a freshman from Pasco, Wash., also had an assist on Tera Ziemer's goal in the 15th minute that gave Western Washington the early lead. Potter headed a kick into the box from Katie Watt to Ziemer, who volleyed the ball into the net for the opening goal.

West Chester would get the equalizer in the 25th minute as a free kick from Kiley Kergides was headed into the net by Alyson Cutter just over the diving save attempt of goaltender Claire Henninger to make it a 1-1 game into halftime.

The Vikings kept pressure on the Golden Rams throughout the contest. Western Washington had 25 total shots with 11 on-goal. Meanwhile, West Chester managed just three total shot attempts with two on net over the 90 minutes.

"We had an incredible blend of experienced returners that laid the foundation, created space and encouraged the new players and the less experienced players to grow into what they could be," head coach Travis Connell added. "Then we had hungry new players that just went after it. I would say confidently that this team improved more over the last four months than any team that I've coached before."

The Vikings were able to celebrate the championship in front of hometown fans as the title was held at Interbay Soccer Stadium in Seattle.