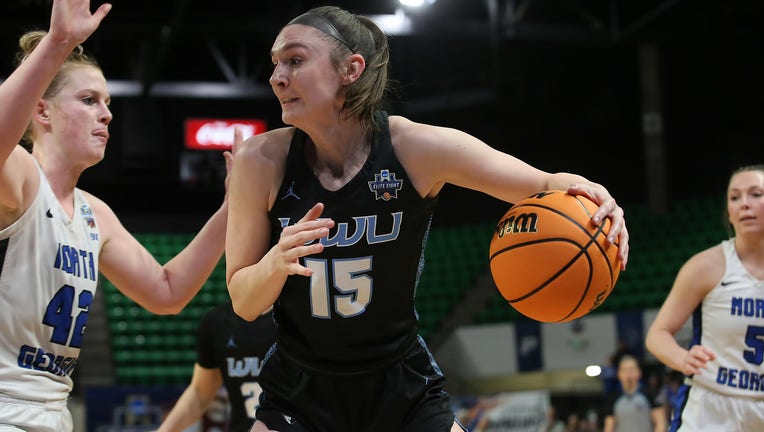 Brooke Walling (No. 15) of Western Washington University dribbles against Julianne Sutton (No. 42) of North Georgia in the Final Four of the Division II Women's Basketball Tournament on March 23, 2022 in Birmingham, Ala. (photo by Michael Wade / Western Washington Athletics)

Despite 27 points and 12 rebounds from sophomore forward Brooke Walling, the Western Washington Vikings fell just shy of their first Division II championship with an 85-72 loss to Glenville State (W.V.) in the national championship game on Friday night.

The Lady Pioneers (35-1) forced the Vikings (25-6) into 25 turnovers that proved to be the difference as they won their first national title in any sport. Re'Shawna Stone scored 25 points and Zakiyah Winfield added 20 to carry the Pioneers to victory.

The Lady Pioneers attack relentlessly on both ends of the court. They applied full-court pressure defenses and traps all game long and attempted to force turnovers. The Vikings did well to weather that pressure to grab a 46-44 halftime advantage. Despite 11 first half turnovers, the Vikings were 20-of-32 from the field when they did manage to break the press.

The trap defense from Glenville State did spark a run for the Pionners. A 16-5 run gave Glenville State a 25-19 lead a minute into the second quarter. The Vikings responded with an 11-0 run to retake the lead. Western Washington would lead by as many as seven, 44-37, before the Pioneers cut the deficit before the break.

But the turnovers continued to pile up and Western Washington became less able to overcome them.

A layup from Avery Dystkra cut the Glenville State lead to 65-62 with six seconds left in the third quarter. However, Zakiyah Winfield hit a jumper as time expired to push the lead back to five at the end of the quarter. Within two minutes, the lead was 10 and the Vikings were unable to find an answer.

Glenville State converted the 25 turnovers in 30 points. After shooting 66.7 percent in the first half, the Vikings 42.8 percent in the second half as they were unable to keep pace.

The Lady Pioneers have been an offensive juggernaut all season. They've scored at least 100 points in 12 games this year and had won their last two games in the tournament by 47 points over West Texas A&M and 24 points over Grand Valley State. They entered the championship averaging a ridiculous 95.8 points per game and set a record for the most points scored in a single D-II NCAA Tournament.

The Vikings won the regular season title in the Great Northwest Athletic Conference. After victories over conference rivals Alaska Anchorage and Central Washington in the first two rounds of the NCAA Tournament, WWU secured the West Region berth in the D-II Elite Eight with a 73-59 victory over Cal State East Bay.