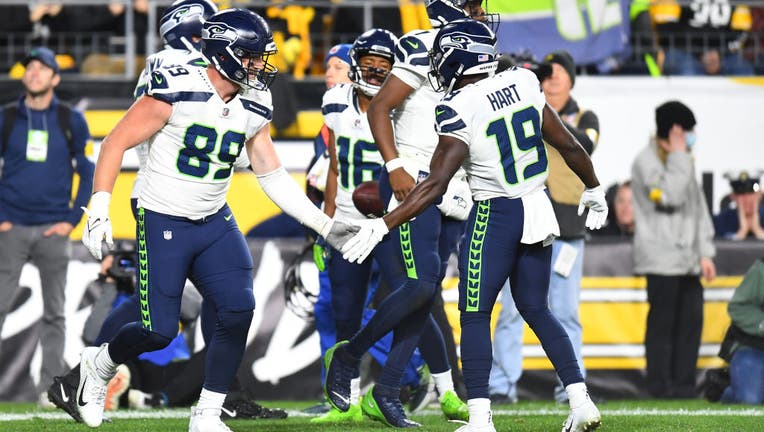 PITTSBURGH, PENNSYLVANIA - OCTOBER 17: Will Dissly #89 of the Seattle Seahawks high fives Penny Hart #19 after scoring a touchdown during the third quarter against the Pittsburgh Steelers at Heinz Field on October 17, 2021 in Pittsburgh, Pennsylvania

PITTSBURGH - Chris Boswell hit a 36-yard field goal with 2:50 left in overtime to give the Pittsburgh Steelers a 23-20 victory over the Seattle Seahawks on Sunday night.

Boswell’s third field goal of the game came three plays after Steelers outside linebacker T.J. Watt forced Seattle quarterback Geno Smith to fumble deep in Seahawks territory. Pittsburgh inside linebacker Devin Bush scooped it up to give the Steelers possession. Two snaps to center the ball in the middle of the field set up Boswell to win it.

Pittsburgh (3-3) won its second straight thanks in large part to Watt, who collected two of his team’s five sacks and helped the defense right itself after a third-quarter soon let the Seahawks rally from a 14-point halftime deficit.

Ben Roethlisberger threw for 229 yards and a touchdown and rookie running back Najee Harris added 83 yards rushing and caught his second scoring toss of the season. Eric Ebron scored the third rushing touchdown of his career as the Steelers found creative ways to move the ball with star wide receiver JuJu Smith-Schuster lost for the season with a shoulder injury.

Smith, starting in place of injured Russell Wilson, completed 23 of 32 passes for 209 yards and a touchdown in his first start in nearly four years. Alex Collins ran for 101 yards while filling in for injured starter Chris Carson, but Smith’s late miscue dropped Seattle to 2-4.

The Seahawks played the final 3:10 of regulation and overtime without linebacker Darrell Taylor, who left on a stretcher and was taken to the hospital with an undisclosed injury. Taylor fell to the ground during a 3-yard gain by Harris with the Steelers driving near midfield. Taylor was on the ground for more than 10 minutes while being attended to by medical staff. Players from both sides came out to offer support.

NBC reported Taylor had movement and feeling in all of his extremities.

Seattle was driving when Smith connected with D.K. Metcalfe near the Seahawks sideline. Rather than step out of bounds with his team out of timeouts, Metcalfe curiously opted to turn upfield. The ball was stripped out of his hands by Pittsburgh’s James Pierre. Seattle wide receiver Freddie Swain fell on it at the Steelers 25.

Smith scrambled to get the Seahawks to the line of scrimmage and appeared to spike the ball with a second left. Officials, however, halted the game to review whether Metcalfe caught the pass inbounds. The call stood on review and the game clock was reset to 3 seconds, giving Smith enough time to spike it so Myers could come on and pull the Seahawks even at the gun.

The teams traded punts to start overtime. Watt, however, harassed Smith into the kind of mistakes that doomed him frequently earlier in his career while starting for the New York Jets.

Even with 10 days to prepare for his first start since Dec. 3, 2017, while playing for the New York Giants, Smith struggled to develop any sort of rhythm during a first half in which the Seahawks managed just three first downs and 65 total yards.

The Steelers weren’t much better in the early going against the NFL’s worst defense. They punted at the end of their first three possessions before Roethlisberger finally got rolling. His 5-yard flip to Harris gave the Steelers a 7-0 lead early in the second quarter and Pittsburgh doubled its advantage late in the half when a 14-play, 84-yard drive ended with an ingenious handoff to tight end Eric Ebron on a jet sweep. Ebron tumbled into the end zone and after the Seahawks flailed one last time before the break, the Steelers appeared to be in complete control.

It was a mirage.

Rather than rely on Smith to get back in it, the Seahawks instead turned to a running game missing starter Chris Carson, who went on injured reserve Saturday due to a lingering neck injury.

It hardly mattered. Relying almost exclusively on the run, Seattle bullied its way back into the game only to let an opportunity to steal one on the road slip away.

Pittsburgh: Are off next week, then travel to Cleveland to take on the Browns on Oct. 31. Cleveland took two of three meetings with Pittsburgh in 2020, including a blowout victory in the first round of the playoffs.