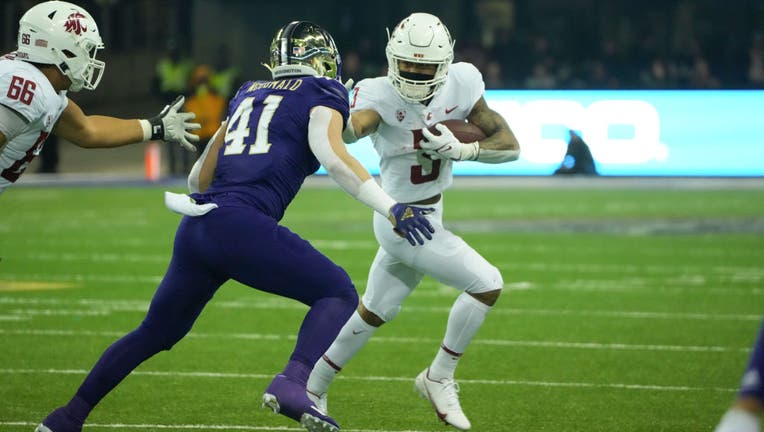 SEATTLE - Max Borghi rushed for 129 yards and two touchdowns, and Washington State handed Washington its biggest loss in the history of the rivalry matchup with a 40-13 victory in the Apple Cup on Friday night.

The Cougars snapped a seven-game losing streak to their rivals picking up their first win in the series since 2012 and first at Husky Stadium since 2007.

And the Cougars (7-5, 6-3 Pac-12) did it in grand, record-setting fashion with a dominant and complete thumping that left those in crimson rushing the field to celebrate while those clad in purple made an early move to the exits.

Borghi scored on a 32-yard touchdown run on Washington State’s opening possession and set the tone for the night. He added a 1-yard TD run in the third quarter and only the Cougars’ inability to finish drives in the first half kept the game from being even more one-sided.

The previous largest margin of victory for Washington State was a 52-26 win in 1973, also in Seattle.

The victory may have locked up the head coaching position permanently for interim head coach Jake Dickert, who was already receiving significant support for the job he’s done in the wake of Nick Rolovich being fired in mid-October. The Cougars went 3-2 in Dickert’s five games in charge.

And there could still be one more game to come besides a bowl trip for Washington State. If Oregon State can beat Oregon on Saturday it will be the Cougars as the Pac-12 North representative opposite Utah in the Pac-12 championship game next Friday in Las Vegas.

Washington (4-8, 3-6) capped its worst season since going winless in 2008. The Huskies were already assured of a losing record after last week’s loss at Colorado and their performance against the Cougars was bland and at times lifeless. 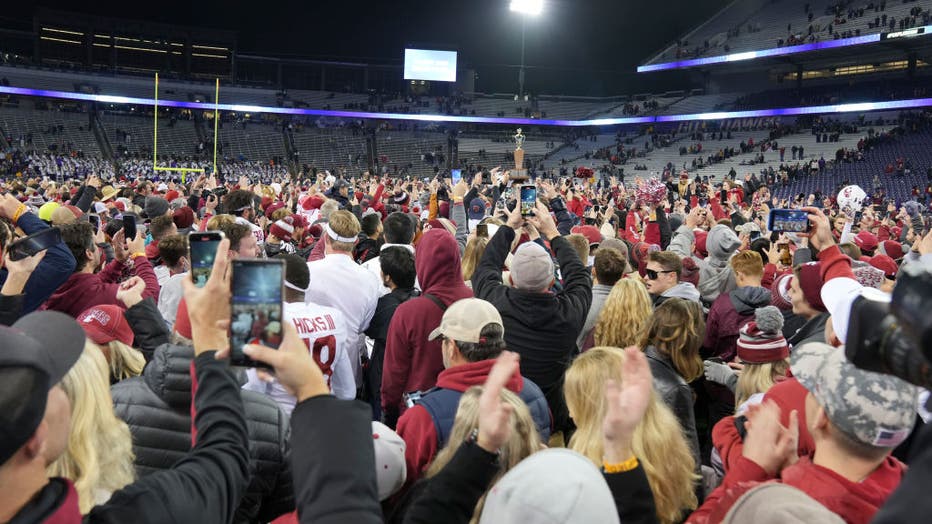 Highly-touted Washington freshman Sam Huard made his first start of the season as Dylan Morris was relegated to spectator for the season finale. Fans have called for Huard as the offensive struggles have continued all season.

Huard was put into a tough position and his performance matched his inexperience. Huard threw four interceptions, the last one a deflection that should have been caught by Devin Culp and was returned 28 yards by Armani Marsh for a touchdown, his second interception of the game.

Huard finished 17 of 31 passing or 190 yards. He threw the first touchdown of his career as Rome Odunze made a terrific catch for a 16-yard TD early in the fourth quarter.

Washington: The Huskies are facing a major rebuild whoever ends up with the head coaching job after the firing of Jimmy Lake. Washington started the season in the AP Top 25 and will end with four straight losses.

Washington State: The Cougars will wait to find out if they’re playing in the Pac-12 title game or if a bowl game is their next stop.

Washington: The Huskies are scheduled to open next season at home vs. Kent State.