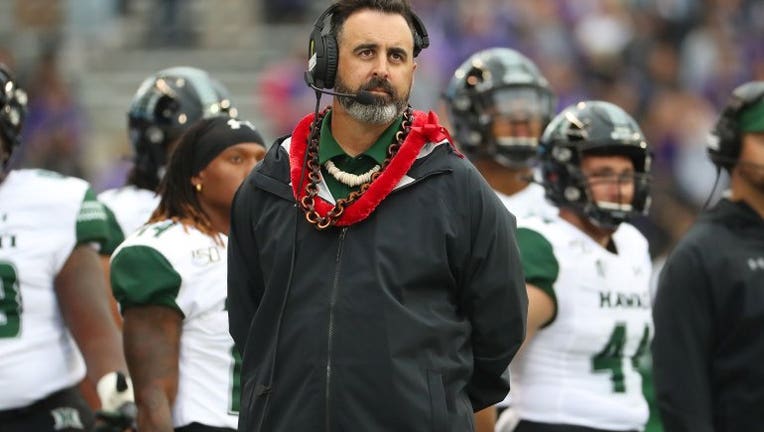 SEATTLE, WASHINGTON - SEPTEMBER 14: Head Coach Nick Rolovich of the Hawaii Rainbow Warriors looks on against the Washington Huskies in the second quarter during their game at Husky Stadium on September 14, 2019 in Seattle, Washington. (Photo by Abbie

Nick Rolovich has left behind the beaches of Oahu for the wheat fields of the Palouse and the chance to see if his pass-happy, high-scoring style can work at Washington State.

Rolovich was hired by Washington State on Tuesday, completing a whirlwind week for the Cougars that saw Mike Leach depart for Mississippi State after eight seasons. It didn’t take long for the Cougars to settle on Rolovich as Leach’s replacement, giving the 40-year-old a chance to lead a Power Five program.

“Nick Rolovich is a genuine person, a program builder, an innovator and the exact fit to lead Cougar football,” Washington State athletic director Pat Chun said in a statement. “Coach Rolovich is committed to academic achievement and developing every aspect of our student-athletes. He has a vision of taking Cougar football on a path to win championships.”

Rolovich agreed to a five-year contract that is expected to pay about $3 million per season. He will be introduced at a news conference on Thursday.

Rolovich has been in charge at Hawaii for the past four seasons and led the Rainbow Warriors to the Mountain West Conference West Division title this season. Hawaii went 10-5 overall, losing to Boise State in the MWC title game but rebounding to beat BYU in the Hawaii Bowl.

Rolovich oversaw a significant turnaround with the Warriors. When he took over at Hawaii in 2016, he inherited a program that had won 11 total games in its first four seasons in the Mountain West. He won at least seven games in three of his four seasons. The 10 wins this season were the most for the Warriors since 2010, when they were co-champs of the WAC with Nevada and Boise State.

“The excitement is real and it’s honest,” Rolovich said. “Most recently what Coach Leach has built gives us a high starting point. I appreciate him as a friend and what he has done to build the program. We are looking forward to learning more about the program, the history, the anecdotes and the legends of WSU football.”

The turnaround Rolovich produced at Hawaii was similar to what Leach did with the Cougars. Washington State was 9-40 before Leach arrived. The Cougars went 55-47 with six bowl appearances in Leach’s eight seasons.

Rolovich went 28-27 in four seasons with the Warriors, including three bowl appearances. He signed a two-year contract extension with Hawaii last January and made more than $600,000 last season with the Warriors.

Last season, Rolovich’s team went 2-1 against the Pac-12 with wins over Arizona and Oregon State but a loss on the road to Washington. Getting the better of the Huskies will be one of Rolovich’s priorities as Washington State has lost seven straight to Washington.

Rolovich spent four seasons as an assistant at Hawaii before becoming the offensive coordinator at Nevada in 2012. He returned to his alma mater to take over the head job with the Warriors in 2016.

Rolovich makes sense for Washington State because of the style of offense he ran at Hawaii. His high-scoring, pass-happy system will play well in Pullman after Leach’s time installing the “Air Raid” offense on the Palouse.

When Rolovich went to a run-and-shoot system two years ago, he consulted with Leach. Hawaii ranked fifth in the country in passing this season and was ninth last season.