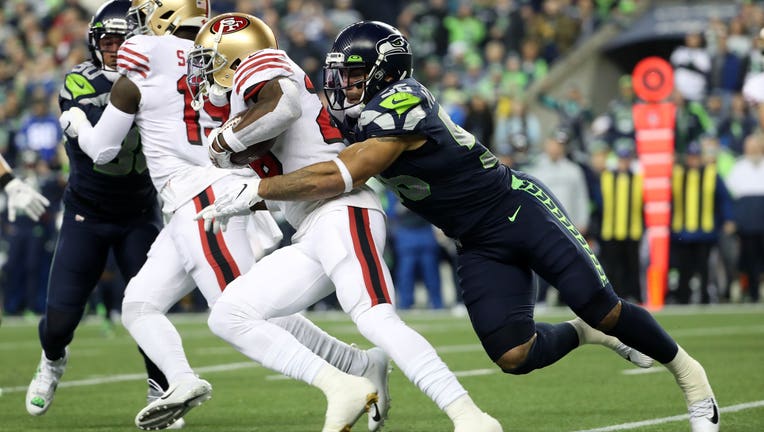 Running back Tevin Coleman #26 of the San Francisco 49ers is tackled by linebacker Mychal Kendricks #56 of the Seattle Seahawks during the first quarter of the game at CenturyLink Field on December 29, 2019 in Seattle, Washington. (Photo by Abbie Par

Washington is signing veteran linebacker Mychal Kendricks off the Seattle Seahawks’ practice squad to boost a defense that has struggled in the first half much of the season.

Agent Douglas J. Hendrickson confirmed the move to The Associated Press on Monday, less than 24 hours after Washington lost 20-15 to Seattle to snap its winning streak at four. Kendricks, 30, hasn’t played this season but has 103 games of NFL experience and won the Super Bowl with Philadelphia three years ago.

Washington was missing starting linebackers Cole Holcomb and Kevin Pierre-Louis and lost reserve Shaun Dion Hamilton to injury against Seattle, and their status for Sunday’s game against the Carolina Panthers aren’t clear. Washington can clinch the NFC East title with a victory and a New York Giants loss to Baltimore.

Getting starting quarterback Alex Smith back would be a boost even after Dwayne Haskins’ bounce-back from two interceptions, but so would the team starting better — offensively and defensively. Washington fell behind 20-3 to the Seahawks before mounting a comeback bid that fell short.

Washington is the only team in the NFL not to score on its first drive of a game this season.

"We still have a ways to go," coach Ron Rivera said. "A big part of it is just knowing how to go out and start a game. We really haven’t started a game the way you would like to. We’ve finished games the way we would have like to."

RELATED: Tenth season may not be end for Seahawks LB K.J. Wright

The defense buckled down in the final 25-plus minutes of the Seahawks game and forced another turnover when Daron Payne intercepted Russell Wilson in the fourth quarter. With No. 2 pick Chase Young and 2019 first-rounder Montez Sweat rushing the quarterback so effectively, the unit has the potential to be one of the best in the league.

But like the offense, it takes time to warm up.

"I feel like we just come out and we know what they’re going to bring to us, and we just try to shut it down," Payne said. "I feel like if we get a grasp of what’s going on early in the game, we’ll be better off as a team."

Maybe the turf at FedEx Field? The much-maligned surface hasn’t been an issue of late, possibly because the stadium isn’t being used to host concerts and other events over the past several months. But young safeties Troy Apke and Jeremy Reaves slipped on long rushing plays by Seattle on Sunday, including Carlos Hyde’s 50-yard touchdown run.

Washington has one more home game this regular season, but would also host a playoff game if it wins the division.

Third-down back J.D. McKissic has become a key part of the offense and rushed for 51 yards in rookie Antonio Gibson’s absence. If Gibson’s toe injury lingers, McKissic showed he can handle the load.

Receiver Terry McLaurin has been dealing with an ankle injury since before the Thanksgiving Day game at Dallas, and it’s showing. McLaurin isn’t making excuses, is gutting through the pain and is still a primary target, but clinching in Week 16 and giving him some rest could go a long way.

Smith’s right calf, Gibson’s toe and Holcomb’s concussion are all major questions. Smith is experienced enough to start even without a ton of practice snaps, and Rivera said Sunday the team is hoping to get Gibson back against Carolina.

7 — Wins that currently 6-8 Washington probably needs to wrap up the NFC East, the weakest division this season.

Rivera wants his players not to think about playoff scenarios or overlook the 4-10 Panthers, who fired their general manager Monday. Washington opened as a 2 1/2-point favorite, and Baltimore is an even better bet to beat New York.