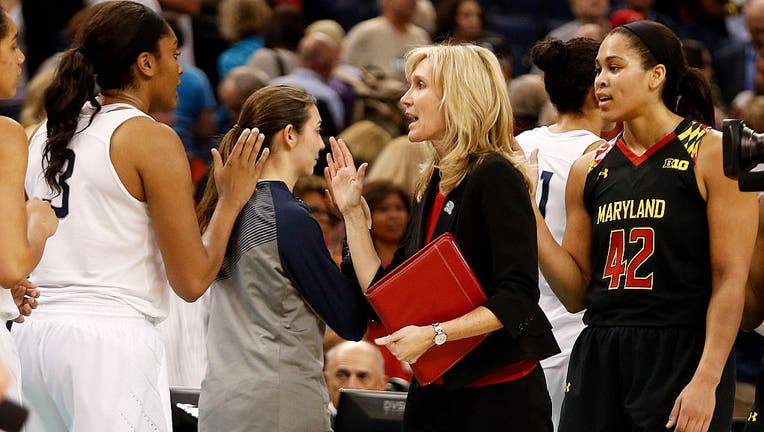 TAMPA, FL - APRIL 05: Associate head coach Tina Langley congratulates Morgan Tuck #3 of the Connecticut Huskies after the Huskies defeated the Terrapins 81 to 58 during the NCAA Women's Final Four Semifinal at Amalie Arena on April 5, 2015 in Tampa,

SEATTLE - Washington hired Tina Langley as its new women’s basketball coach Monday, giving one of the top coaches in Conference USA over the past six seasons her first shot at leading a Power Five program.

Langley replaces Jody Wynn, who was fired last month after four disappointing seasons in charge of the Huskies.

"Throughout the search process, Tina stood out as the ideal leader for this program," Washington athletic director Jennifer Cohen said. "Her commitment to the development of students both on and off the court, combined with her vision for bringing the program back to competing for championships, made her a perfect fit for our culture."

Langley went 126-61 in six seasons as head coach at Rice. The Owls went 44-4 in conference play over the past three seasons and Langley was named the Conference USA coach of the year in 2019.

Rice went 23-4 overall this season and 12-2 in the conference to win its first outright conference title. The Owls lost to Middle Tennessee in the Conference USA tournament title game, but rebounded to defeated Ole Miss for the Women’s NIT championship.

"This is an elite institution that offers an unbelievable experience both academically and athletically and I’m humbled to have the opportunity to compete in the best conference in women’s basketball," Langley said. "It was clear from my first conversations with Jen (Cohen) that we have such strong value alignment and I’m so grateful to her and Erin (O’Connell) for giving me this chance to lead a program that’s had so many incredible players and coaches over the years."

Prior to her position at Rice, Langley was an assistant to Brenda Frese at Maryland for seven seasons. Langley also worked at Georgia, Clemson and Toledo.