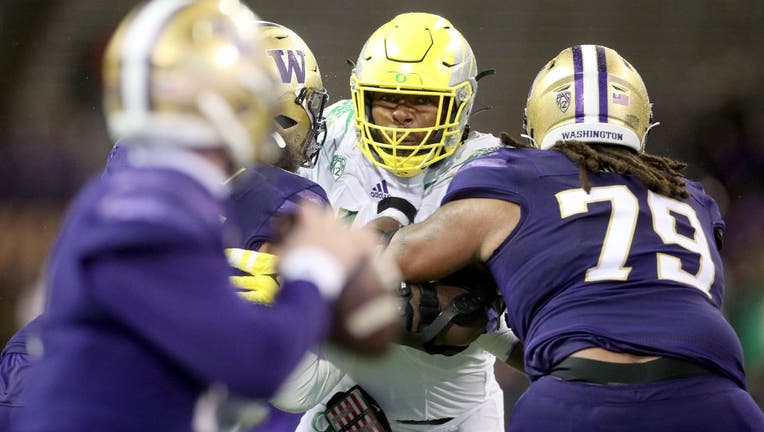 SEATTLE, WASHINGTON - NOVEMBER 06: Kayvon Thibodeaux #5 of the Oregon Ducks in action against the Washington Huskies during the fourth quarter at Husky Stadium on November 06, 2021 in Seattle, Washington. (Photo by Steph Chambers/Getty Images)

Donovan’s firing came a day after the Huskies managed just seven first downs in a 26-16 loss to No. 5 Oregon. Washington had 166 total yards in the loss to the Ducks, which was the capper to a long run of issues with Donovan’s system. The 166 total yards were the fewest by Washington since a 2010 loss to Stanford.

Washington said wide receivers coach Junior Adams will assume play-calling duties for the remainder of the season, while offensive quality control analyst Payton McCollum will be promoted to quarterbacks coach.

Washington has scored more than 30 points in regulation only once in nine games.

During Donovan’s first season, the Huskies played just four games due to a COVID-19 outbreak that ended their season early. Washington showed promise scoring at least 24 points in each game and topping 350 yards of offense in all four.

The Huskies started this season No. 20 in the preseason AP Top 25, but managed just seven points in a home loss to FCS power Montana to start the season and set the tone for offensive problems that have yet to be solved.

Donovan was a surprise hire when coach Jimmy Lake tabbed him to take over Washington’s offense before the start of the 2020 season. Fans wanted a splashier hire, but Lake went with Donovan, who had five years of experience as a college offensive coordinator — three at Vanderbilt and two at Penn State — and spent four seasons working on the offensive staff of the Jacksonville Jaguars before coming to Washington.

Donovan became an offensive coordinator at Vanderbilt under James Franklin in 2011 and followed Franklin when he went to Penn State in 2014. Donovan was fired after the 2015 season.

During his four years with the Jaguars, Donovan spent two seasons working with quarterbacks, one coaching tight ends and one coaching running backs.