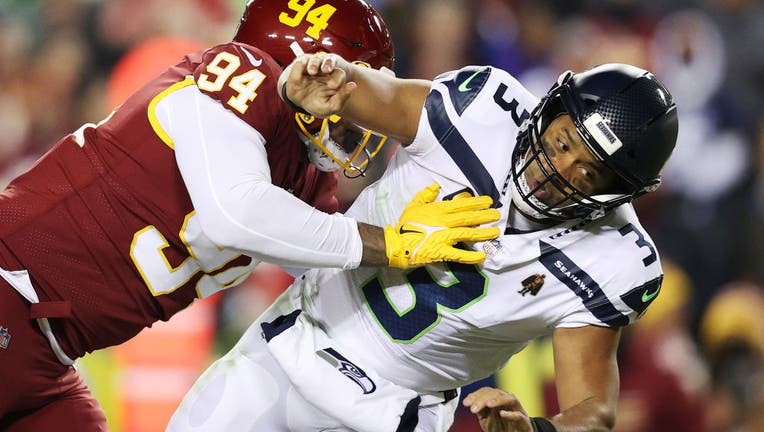 LANDOVER, MARYLAND - NOVEMBER 29: Daron Payne #94 of the Washington Football Team tackles Russell Wilson #3 of the Seattle Seahawks in the first quarter of the game at FedExField on November 29, 2021 in Landover, Maryland. (Photo by Patrick Smith/Get

LANDOVER, Md. - Ron Rivera was left adrift without a kicker and felt like he had to go for it in every situation.

The final roll of the dice by "Riverboat Ron" on fourth and goal opened the door for some heroics by Russell Wilson, but Kendall Fuller’s interception on Seattle’s 2-point conversion attempt allowed Washington to hold on and beat the Seahawks 17-15 Monday night for the team’s third consecutive victory.

"It meant a lot just because of the way these guys fight," said Rivera, who pointed at and encouraged fans while walking off the field. "In spite of everything that’s gone on during the game with the injuries, we were able to come out on top, so good for these guys."

After Taylor Heinicke’s fourth-down pass to Logan Thomas at the goal line was ruled incomplete on video review, Wilson led the Seahawks on a 10-play, 96-yard touchdown drive in just over two minutes. He connected with Freddy Swain on a 32-yard TD pass with 15 seconds left, but his 2-point throw to Swain was picked off by Fuller, preventing Wilson from leading a memorable comeback on his 33rd birthday.

"You’ve seen Russell do that for the last 10 years, and you never count him out," Heinicke said.

He almost got another chance when it looked like Seattle (3-8) had recovered an onside kick. But the Seahawks were penalized for illegal formation on the first attempt and failed to recover the second.

"The last few minutes of the game shows that we have the right character of guys," Wilson said. "That’s what’s special about this team just to believe that something great’s going to happen."

Wilson was 20 of 31 for 247 yards and two TD passes, but he missed several throws and lost three consecutive games for the first time as the Seahawks’ starting quarterback.

Washington (5-6) moved into the final NFC wild-card spot with the win. "We got some momentum right now," receiver Terry McLaurin said.

J.D. McKissic caught a touchdown pass from Heinicke, ran for another and accounted for 56 yards from scrimmage against the team he broke into the NFL with before being carted off with an undisclosed injury late in the game.

"He’s one of the most versatile guys in the league," Rivera said of McKissic. "He’s a threat on first, second and third down."

Heinicke and Co. had to do everything in the second half without the possibility of a field goal after kicker Joey Slye injured a hamstring late in the second quarter on an extra point attempt that was blocked and returned for two points. Heinicke evaded a couple of potential sacks and outdueled Wilson in a matchup of mobile QBs, going 27 of 35 for 223 yards with the TD throw to McKissic and an interception.

A departure from each team’s typical results in prime time, Washington won at home on Monday night for the third time in 20 tries since FedEx Field opened in 1997. Seattle, which entered with the NFL’s best winning percentage on Monday night, fell to 11-4 in these situations in Carroll’s 11 seasons as coach.

Carroll’s Seahawks have fallen out of playoff contention over the past three weeks. They were right in it against Washington when Rasheem Green blocked, recovered and returned the extra point attempt late in the first half to tie the score at 9, but the offense went cold after halftime.

"It’s just such an obviously issue for us not converting," Carroll said. "We didn’t run the ball well at all tonight, but there just so few plays that every single play counts so much in the end."

Since the NFL allowed the defense to return a PAT for points in 2015, Green became the first player to block, recover and score on the same play, according to SportRadar. It was the first defensive conversion in the league since 2019 and the 11th over the past seven seasons, with seven coming on extra points.

A sprinkler burst in a suite during the first half, the second public water malfunction at Washington’s home stadium this season. A pipe burst over fans in the opener against the Los Angeles Chargers on Sept. 12.

Everett attempted a "Lambeau Leap" style jump into the stands after his TD catch in the first quarter. A fan in a burgundy No. 52 Washington jersey pushed Everett off to continue to celebration on the field.

Two former Washington employees used the occasion of the NFL’s "Inspire Change" night to shine a spotlight on their efforts to get the league to release the findings of an investigation into the team’s workplace misconduct. Owner Dan Snyder was fined $10 million last summer upon the completion of the investigation, but a written report was never produced.

"We deserve to have the findings be shown to the public so there’s actual accountability," said Megan Imbert, who was wearing a #ReleaseTheReport sweatshirt in the team’s colors.

Seahawks: Starting LG Damien Lewis was out with an elbow injury. Kyle Fuller started in his place.

Washington: C Wes Schweitzer left in the second quarter with an ankle injury, pushing fourth-stringer Keith Ismael into action. ... Thomas returned after missing six games with a hamstring injury. ... WR Curtis Samuel made his first catch since Week 4, playing in just his third game this season because of a groin injury that has lingered for months.