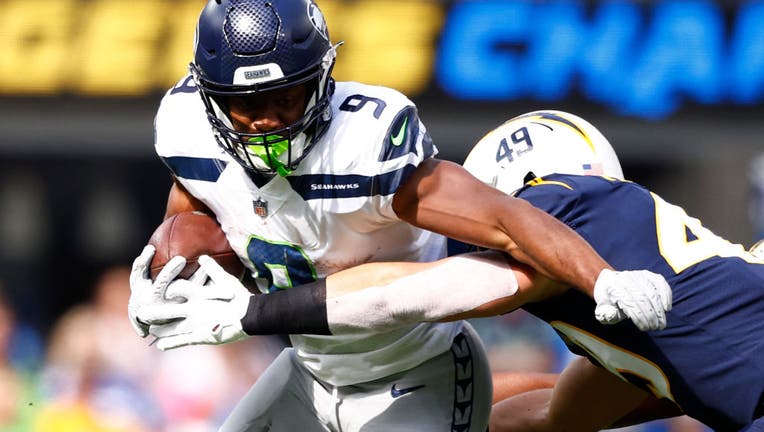 INGLEWOOD, CALIFORNIA - OCTOBER 23: Drue Tranquill #49 of the Los Angeles Chargers tackles Kenneth Walker III #9 of the Seattle Seahawks during the first half of the game at SoFi Stadium on October 23, 2022 in Inglewood, California. (Photo by Ronald

INGLEWOOD, Calif. - Expected by many to end up in the NFC West basement, the Seattle Seahawks instead are leading the division after seven weeks.

Seattle vaulted into the division lead with its most impressive victory over the season. Rookie Kenneth Walker III rushed for 168 yards and two touchdowns as the Seahawks beat the Los Angeles Chargers 37-23 on Sunday.

NFC West rival San Francisco lost 44-23 at home to Kansas City to fall to 3-4, and the Los Angeles Rams (3-3) had a bye, leaving the Seahawks with a half-game lead — which coach Pete Carroll didn’t even realize until he was informed by a reporter.

"Nobody told me that before we started the meetings in there (the locker room). I would have been going nuts about that. That’s fun, too. That’s good," Carroll said. "Seven weeks in and look where we are. Who would have thunk it?"

Marquise Goodwin caught a pair of scores for the Seahawks (4-3), who have won three of four. Geno Smith completed 20 of 27 passes for 210 yards and two touchdowns, his fifth multi-TD game of the season. Jason Myers added three field goals.

"I really liked us today, You could feel us in all three phases. We were humming," Carroll said. "It was good to see the offense be able to go down the field and put points on the board and the defense slowing them down."

Seattle led 17-0 late in the first quarter, its largest lead after 15 minutes since a win over New Orleans in Week 13 of 2013. It was the Seahawks’ largest road lead at the end of the first since 2000.

It was the third straight week the Chargers (4-3) fell behind by double digits in the first quarter. They rallied against Cleveland and Denver, but were unable to pull it off this time and had a three-game winning streak snapped. LA now trails the Chiefs by one game in the AFC West.

In three first-quarter drives, the Chargers were stopped on fourth down, Justin Herbert threw an interception to Ryan Neal, and Herbert was sacked and his fumble was recovered by Darrell Taylor. Seattle converted all three mistakes into points.

"We were able to fight our way back and get back into the game, but there’s a lot of energy that goes with that. Then, we just didn’t play a clean enough second half in any phase to create any momentum and to get the lead back," Chargers coach Brandon Staley said. "Just didn’t play well enough today in any phase."

Herbert was 33 of 51 for 293 yards with two touchdowns and an interception, marking the second time in his career he has thrown at least 50 passes in consecutive games. Austin Ekeler had 127 scrimmage yards (96 receiving, 31 rushing) and a pair of touchdowns, giving him eight over the last three games.

Mike Williams added seven receptions for 86 yards and a TD.

Walker took over as Seattle’s starting running back after Rashaad Penny suffered a season-ending ankle injury two weeks ago. His 265 yards in wins over the Cardinals and Chargers are the most in franchise history in a player’s first two starts.

Walker’s 12-yard TD in the first quarter extended the lead to 14-0. He broke the game open with a 74-yard sprint down the right sideline in the fourth quarter to make it 37-16. According to Next Gen Stats, Walker reached a top speed of 22.09 mph, the fastest by a ball carrier this season.

"It’s a great feeling because this is rare. It doesn’t really happen much in football. So like when you get the opportunity, you got to make the best of it," Walker said of his run, which was the seventh-longest in franchise history.

It was the first multi-TD game for Goodwin since 2018, when he was with the 49ers. Goodwin, in his first season with the Seahawks, had six catches for 79 yards coming into the game but saw increased time after DK Metcalf was carted off with a knee injury in the first quarter and Tyler Lockett was limited with a strained hamstring.

Goodwin gave Seattle a 7-0 lead on a 20-yard reception. The Seahawks went ahead 24-14 with 1:40 remaining in the first half when Goodwin out-jumped JC Jackson for a 23-yard score.

"We have guys all around that given the opportunity, can step up and make plays. I myself received an opportunity and now I’m given a chance to go out there and thrive. We have guys all over the team who have not gotten an opportunity yet, but when they do get their opportunities, they step up and make plays," Smith said. "Marquise is a great player and has been a great player in this league for a long time. He made two great catches. We just have to continue to build on that."

Los Angeles got within 17-14 with touchdowns on consecutive drives. Ekeler had a 7-yard run and Williams caught a 13-yard pass from Herbert to pull the Chargers within a field goal with 9:43 remaining in the second quarter.

The Chargers got their first safety since the end of the 2020 season when Sebastian Joseph-Day and Troy Reeder brought Walker down in the end zone early in the fourth to bring them within 27-16.

Seahawks: LB Nick Bellore and OG Phil Haynes suffered concussions during the second half. ... DT Poona Ford had a foot injury in the first quarter.

Chargers: Have their bye next week, then travel to play Atlanta on Nov. 6.