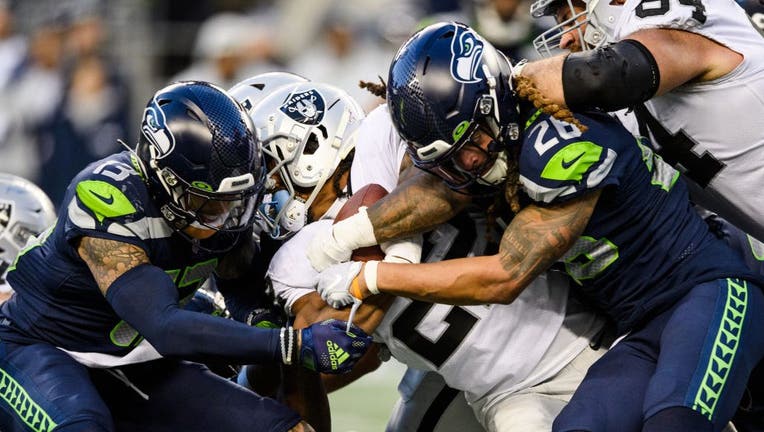 SEATTLE, WASHINGTON - NOVEMBER 27: Ameer Abdullah #22 of the Las Vegas Raiders is tackled by Josh Jones #13 and Ryan Neal #26 of the Seattle Seahawks during the fourth quarter at Lumen Field on November 27, 2022 in Seattle, Washington. (Photo by Jane

"He did well. He practiced and did a nice job here today. He's looking very promising for the game," Carroll said.

Neal was injured in overtime of Sunday's loss to the Las Vegas Raiders on a third down stop of running back Josh Jacobs. Neal was in obvious discomfort after the play and remained on the field for a couple minutes before getting up and slowly walking off.

Carroll said that Neal had a badly bruised elbow and a shoulder injury, though the elbow was the more significant concern. However, Neal returned to practice on Thursday and was a full participant on Friday.

He's officially listed as questionable, but the expectation is he'll play against the Rams.

Meanwhile, the Seahawks have dealt with an illness sweeping through the locker room over the last 10 days.

Running back DeeJay Dallas, defensive end L.J. Collier and tackle Abe Lucas all were listed as ill on the injury report a week ago ahead of the game with the Raiders. Ten different players on the active roster this week have been listed on the injury report with an illness with a few practice squad players also coming down sick as well.

Safety Josh Jones and running back Travis Homer (knee) were listed as questionable to play Sunday due to the illness. Jones didn't practice on Friday while Homer returned to limited participation.

"It's a flu type of thing. It's a 48-hour deal," Carroll said. "It's hit people differently, been fevers and all those kinds of regular flu stuff and some guys just been hit differently, you know, just head cold type stuff. We're as well-schooled about trying to take care of people as you can be (due to COVID protocols the last two seasons) so we've done a good job to keep it down. And the positive thing about it is you know it's only going to last a couple of days. So we know the guys will bounce right back out of it."

However, Carroll said he expected all of those players to be able to play as well.

"We're gonna play with it if we have to," Carroll said.

Safety Johnathan Abram, who was claimed off waivers from the Green Bay Packers this week, is not expected to play as he's only been with the team for two practices.

"He’s an experienced player," Carroll said of Abram. "He’s really versatile. He’s done a lot of stuff. He has not been just a deep in a hole guy or a guy at the line of scrimmage. He has done a lot of stuff in our system. We’ve recognized that he’s got the versatility. We’ve seen him blitz, and cover, and play deep stuff, and all of that which is really conducive to our style of play. That’s one of the reasons we were attracted. He’s always been a tough guy. I know he is a great competitor. So, we’ll see what happens. It’s going to take a little time here."