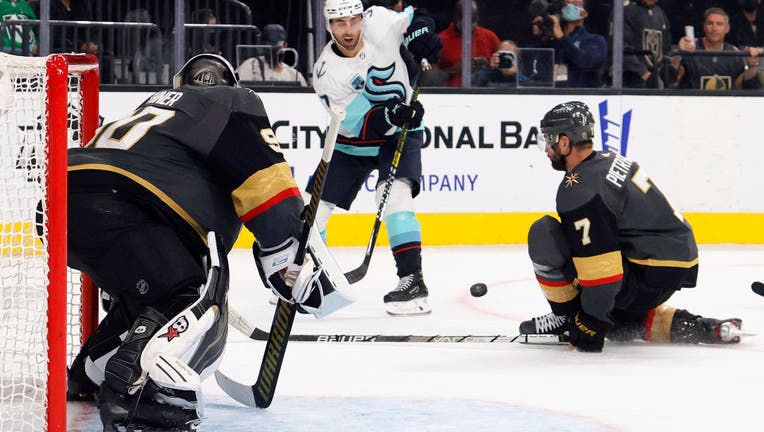 LAS VEGAS, NEVADA - OCTOBER 12: Jordan Eberle #7 of the Seattle Kraken centers the puck against the Seattle Kraken during the third period of the Kraken's inaugural regular-season game at T-Mobile Arena on October 12, 2021 in Las Vegas, Nevada. The G

Vegas, which made its league debut four years ago, held off a rally from the NHL’s latest addition in what turned out to be a scrappy effort from the Kraken.

Seattle erased a 3-0 deficit and tied the game, but Chandler Stephenson’s goal midway through the third period held up.

Jonathan Marchessault also scored for the Vegas, while Robin Lehner made 25 saves.

Pacioretty and Marchessault gave the Golden Knights a 2-0 lead on two of Vegas’ first three shots on goal.

The Golden Knights ignited the crowd when Chandler Stephenson took a clean entry into a wide-open neutral zone and picked up momentum and fed captain Mark Stone to send the Kraken one direction while Pacioretty skated down the left side. Stone promptly sent a crisp pass to Pacioretty, who beat Grubauer far side to give Vegas its first goal of the season.

Three minutes later it was one of the original members of the Golden Knights from their expansion season with some crafty stick handling, as Marchessault showed patience by skating in on Grubauer, then deked around him to the goal line before burying the puck to make it 2-0.

Though it appeared Nic Hague extended Vegas’ lead to 3-0 in the second period after taking a beauty of a pass from Stone, his wrist shot was later rewarded to Pacioretty who was at the doorstep for a deflection.

Donato gave the smattering of Kraken fans something to cheer about later in the period when he gathered a loose puck and backhanded past a sprawling Lehner who couldn’t get back in time.

Less than a minute later, McCann’s shot to the crease from the right side trickled just under Lehner’s pad to cut Vegas’ lead to one and breathe life into Seattle’s bench.

Geekie skated into the right circle and beat Lehner top shelf to tie the game in the third period, but moments later Stephenson’s redirect off his skate put Vegas back on top.

NOTES: McCann, Marcus Johansson, Jamie Oleksiak, and Joonas Donskoi were all cleared earlier in the day, while forward Calle Jarnkrok remained in the NHL’s COVID-protocol. The Golden Knights improved to 91-0-1 in franchise history when leading by three goals. ... Three goals were scored by those wearing No. 67 tonight (Pacioretty twice and Geekie).

Seattle: Travels to Nashville to play the Predators on Thursday