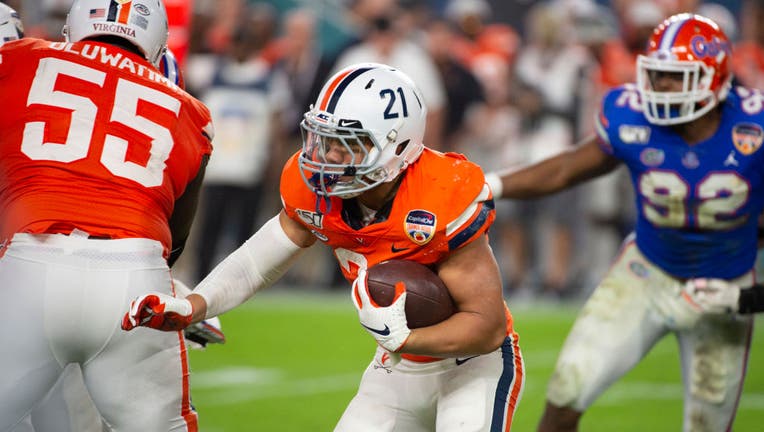 MIAMI GARDENS, FL - DECEMBER 30: Virginia Cavaliers tailback Wayne Taulapapa (21) runs with the ball during the College Football game between the Florida Gators and the Virginia Cavaliers at the Capital One Orange Bowl on December 30, 2019 at the Har

SEATTLE - The Washington Huskies received a commitment from former University of Virginia running back Wayne Taulapapa on Monday.

Taulapapa is a fifth-year senior that has rushed for 1,192 yards and 19 touchdowns over the last three seasons for the Cavaliers. He had 62 carries for 324 yards and two touchdowns last season at Virginia.

Taulapapa is from Laie, Hawaii and played high school football at Punahoe. He was a member of the 2016 high school graduating class, but didn't get to the University of Virginia until 2018 as he served a two-year Mormon mission in Nicaragua.

Taulapapa's addition to the Huskies helps add depth to an area that has already been concerning to the new coaching staff.

"I thought we'd have more depth at the running back position, honestly. Just thought that would be a little stronger at this point," offensive coordinator Ryan Grubb said of the unit last week.

Injuries have been some of the reason for the concern. Cam Davis and Richard Newton will miss all of spring practice with Emeka Megwa likely out as well. Sam Adams II is expected to be limited throughout camp. The team moved Camden Sirmon from quarterback to running back to help address the depth problem as well.

In addition to Taulapapa, the Huskies got former New Mexico running Aaron Dumas as a transfer earlier in the offseason as well.

"I think there's a lot of unproven situations in the running back room. I think we've got a lot of work to do in there," Grubb said.