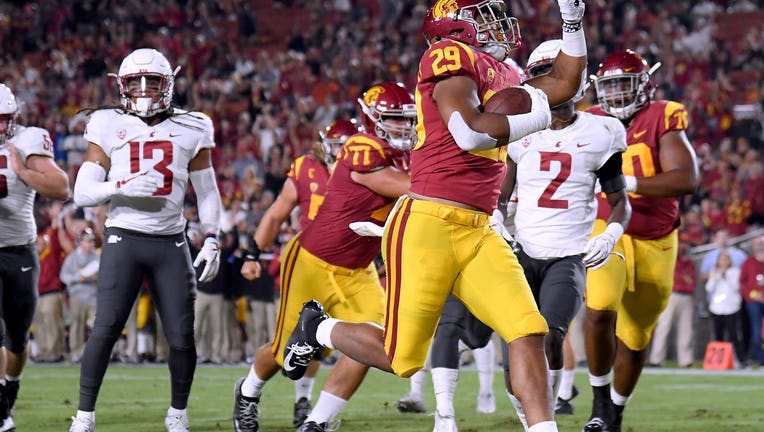 Vavae Malepeai rushed for his second touchdown with 8:03 to play for the Trojans (2-2, 1-1 Pac-12), who rallied from a fourth-quarter deficit to remain unbeaten at the Coliseum under coach Clay Helton.

After back-to-back road losses to Stanford and Texas put the Trojans in dire September straits, they responded with a strong second-half performance to hold off the Cougars (3-1, 0-1).

Gardner Minshew passed for 344 yards and three touchdowns in another strong performance for Washington State, while James Williams and Max Borghi rushed for scores.

But one year after the Trojans took their first loss of last season in a Friday night game in Pullman, the Trojans showed resilience and fourth-quarter tenacity.

Easop Winston caught his second TD pass from Minshew with 10:15 to play, but the Trojans responded with a 56-yard scoring drive capped by Malepeai's TD run and Daniels' pinpoint 2-point conversion pass to Vaughns with 8:03 left.

USC had no trouble moving the ball on its opening drive, going 80 yards on five rushing plays culminating in Malepeai's TD run. Not much went well in the first half for the Trojans, and Dezmon Patmon's TD catch eventually sent the Cougars into halftime up 24-17.

Washington State then opened the second half with a 75-yard drive capped by Borghi's 13-yard TD run, but the Trojans finally responded.

Pittman, whose exceptional catch shortly before halftime was ruled just out of bounds, took a 50-yard pass to the house. USC's defense stiffened and forced two punts before St. Brown's gorgeous TD catch and the extra point put the Trojans up 31-30.

But Winston immediately caught a 59-yard pass down the middle and followed it up with a 4-yard TD catch. Washington State's 2-point conversion attempt failed, and USC drove for Malepeai's TD run and Vaughns' 2-point conversion catch, putting the Trojans up 39-36 with 8:03 left.

The weekday crowd of 52,421 was USC's smallest for a home game since 2001, but was still bigger than many expected for the school's first Friday home game since 1999. Parking and tailgating around the Coliseum is severely limited while the 95-year-old stadium undergoes an extensive renovation.

Washington State: After opening the season with three victories over modest nonconference opposition, the Cougars responded fairly well to a big step up in competition. Late-game execution wasn't perfect, particularly on special teams, but this loss is no embarrassment for the Cougs or Minshew, who looked excellent again.

USC: The Trojans responded to a major gut check with a series of big second-half plays. Although they still made far too many mistakes and committed too many penalties, they'll grow from this one — and Daniels is getting better every week.

USC: At Arizona next Saturday, Sept. 29.