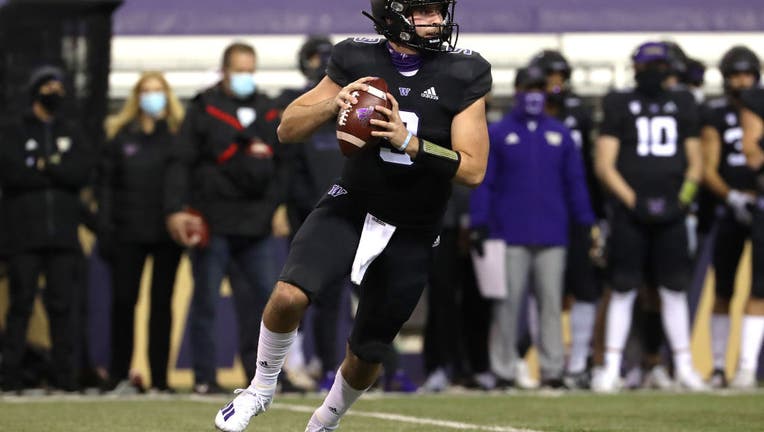 SEATTLE, WASHINGTON - NOVEMBER 21: Dylan Morris #9 of the Washington Huskies looks to throw the ball in the first quarter against the Arizona Wildcats at Husky Stadium on November 21, 2020 in Seattle, Washington. (Photo by Abbie Parr/Getty Images)

SEATTLE - What was supposed to be a trip to the desert for Utah and a rare Sunday game turned into a Saturday afternoon matchup in the Pacific Northwest.

What was supposed to be Washington’s trip to the chilly Palouse on a short week to face its in-state rival instead became an unexpected extra home game.

The uncertainty of the 2020 college football season was on full display in the Pac-12 this week. Instead of Washington facing Washington State and Utah taking on Arizona State, it will be the Huskies and Utes meeting on Saturday in Seattle.

Both teams were determined to avoid another week without playing after each of their opponents didn’t have enough scholarship players available due to positive COVID-19 cases and subsequent contact tracing.

RELATED: Fans react to cancellation of Apple Cup and its impact to holiday traditions

Utah already had two games against Arizona and UCLA canceled because of its own troubles dealing with the coronavirus. Washington (2-0) saw its season opener at California called off due to COVID-19 issues in the Golden Bears program.

Getting on the field was the priority for both, even if it left staffs scrambling to prep for an unexpected opponent.

“We gambled correctly this week and we put all of our attention in our game plan and all prep work at practice on the University of Utah,” Washington coach Jimmy Lake said. “So this week is like (any) other week, we feel.”

Utah (0-1) finally got on the field for the first time last week and looked the part of a team that had been stuck watching in a 33-17 loss to USC. Adding to the Utes’ frustration was the loss of starting quarterback Cameron Rising to a shoulder injury. Rising was hurt in the first half and is expected to miss the rest of the season.

South Carolina transfer Jake Bentley stepped in after Rising was hurt and will get the start against Washington.

“We have full confidence in Jake moving forward and it will be a big benefit to him taking all the reps for once this week,” Utah coach Kyle Whittingham said.

While the 44-27 final score may have not indicated it, Washington’s defense was exceptional in last week’s win over Arizona. The Huskies held the Wildcats scoreless and to just 66 total yards through three quarters before Washington turned to backups in the fourth quarter.

Lake was especially pleased with Washington’s run defense, which was gashed for 167 yards rushing by Oregon State in its opener. The Huskies allowed just 72 yards on the ground against Arizona.

Utah had 111 yards rushing in its opener against USC using a combination of backs. Ty Jordan led the way with 32 yards on seven carries.

“There’s other factors as well but that was the main problem is we didn’t control the line of scrimmage like we expected to,” Whittingham said.

For a second straight week, Washington showed it’s not going to rely on just one running back.

Four different backs had at least six carries and Washington had 233 yards rushing in the win over Arizona. Richard Newton led the way with 81 yards, including a long TD run. Kamari Pleasant had six carries for 43 yards and Cameron Davis had 40 yards on six carries. The Huskies’ leading rusher from the opener against Oregon State — Sean McGrew — had 35 yards on 11 carries last week.

Bentley will bring plenty of experience into the starting role for Utah. He started 33 games in his career at South Carolina and left the school ranked second in completion percentage, third in pass completions and third in passing touchdowns in program history. South Carolina was 19-14 in games Bentley started.

Bentley was 16 of 28 for 171 yards, one touchdown and two interceptions after replacing Rising last week.

“We build the offense now around Jake and his skill set and away we go,” Whittingham said.

Washington quarterback Dylan Morris was solid for a second straight week. Morris was 15 of 25 for 230 yards against Arizona and his numbers could have been far more impressive if not for dropped passes.

Washington will get an unexpected chance at home to celebrate the 100th anniversary of the first game played at Husky Stadium. One of the most picturesque settings in college football, the stadium hosted its first game at its current site on Nov. 27, 1920, a 28-7 loss to Dartmouth.