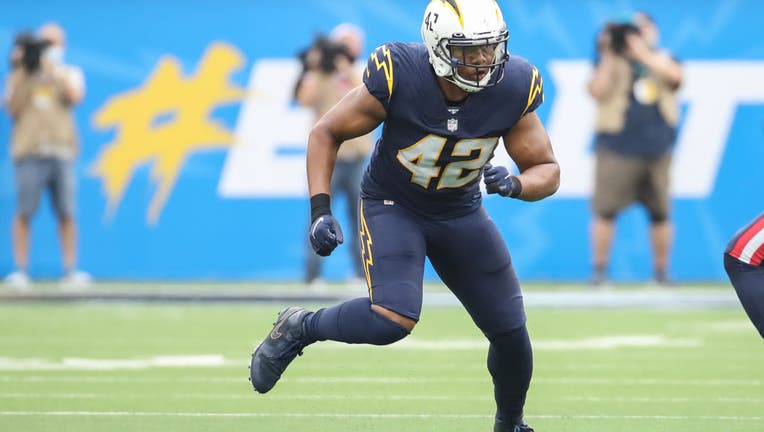 RENTON, Wash. - After a career-year with the Los Angeles Chargers, linebacker Uchenna Nwosu is looking to build upon his performance and branch out in his move to the Seattle Seahawks.

Nwosu, 25, signed a two-year, $20 million deal with the Seahawks during free agency last month after four seasons with the Chargers. Nwosu is a Los Angeles native and has yet to live outside the L.A. metro area. He played his college football at USC and was drafted by the Chargers in 2018.

Nwosu is excited for some change in his move to Seattle.

"I'm an L.A. kid," Nwosu said on Thursday. "I've been here my whole life, high school, college and the first four years of my pro career. So I feel like I've never got to really see the world, see other cities. You go there to visit but you're only there for a day. So to be able to go to a place that's not too far away. You know, Seattle, they got nice trees, nice views, you know, just feel like it's really a literal breath of fresh air. So I'm really looking forward to that."

Nwosu became a full-time starter last season for the Chargers and responded with 40 tackles, 5.0 sacks, and 17 quarterback hits. All three are career-highs. He also recorded the first interception of his career.

Nwosu began to thrive in the 3-4 defensive scheme the Chargers started to run under new head coach Brandon Staley. The Seahawks are shifting toward more 3-4 principles in their defense as well under new defensive coordinator Clint Hurtt. Like Hurtt and associated head coach for defense Sean Desai, Staley has coached under former Denver Broncos head coach Vic Fangio in both Denver and Chicago.

That connection and the familiarity of scheme between the two teams gives Nwosu confidence and comfort in joining a new team. It also gives him the belief that he can build upon his performance last year with the Chargers.

"Being able to go to into another year being in the same scheme, you know, similar verbiage, similar tasks, similar responsibilities. It allows me to be myself, allows me to unlock my true potential, what I could do. It was on display last season and I think it'll be more on display this year," Nwosu said.

Nwosu has appeared in 62 career games for the Chargers with 25 career starts, 15 of which came last season. The 782 snaps he played last season were more than double that of any other season in his career.

Nwosu added that the Seahawks were the team that gave him the best offer in free agency.

"Honestly speaking Seattle was really my best offer. I had a couple of interests from other teams, but I felt like Seattle was the best offer that I had on the table at that time so I just went with it," he said.

Nwosu also said the lack of a state income tax in Washington compared to California was a selling point as well, including its relative closeness to Los Angeles and his family.

"A lot of family came into play. It's still close to home. You know, of course, taxes. California was eaten me up in taxes so I feel like it's always good to make that decision to come here," he said.

"I just feel like Seattle is a great history. I get to experience a legit fan base. Like I said, it's a breath of fresh air. You know, the coaching staff and a lot of USC alumni in this place, so I feel like they'll take care of me, show me a lot of love and respect here and I'm just looking forward to it."