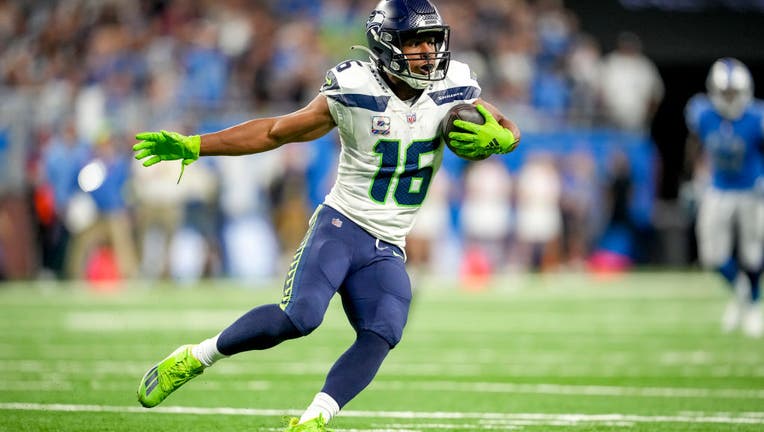 DETROIT, MICHIGAN - OCTOBER 02: Tyler Lockett #16 of the Seattle Seahawks runs the ball against the Detroit Lions at Ford Field on October 2, 2022 in Detroit, Michigan. (Photo by Nic Antaya/Getty Images)

RENTON, Wash. - Seattle Seahawks head coach Pete Carroll said wide receiver Tyler Lockett has a good chance of playing against the Los Angeles Chargers on Sunday despite being listed as questionable with a hamstring injury.

Lockett didn't practice at all during the week for the team and Carroll called him a game-time decision. However, he was optimistic about Lockett's chances to play.

"His chances are really good of playing," Carroll said. "We put him on ice to make sure that he can get stronger. Through these last two weeks, he was a little bit hampered last week, but he made it through. We're just trying to be careful with him."

Lockett had just two catches for 15 yards last week against the Arizona Cardinals as Seattle's offense had its most challenging day of the season so far. However, that came on the heels of Lockett posting 105 yards on five catches with two touchdowns against the New Orleans Saints the week before.

"If there's anybody in the program we can do this with, he can do it," Carroll said. "We'll see. I'm not going to know until game day."

Cornerback Sidney Jones IV was a late addition to the injury report as he's listed as questionable due to a groin injury. He was limited in practice on Friday.

Cornerback Isaiah Dunn was ruled out due to a hamstring injury. Guard Gabe Jackson (hip/knee), wide receiver Penny Hart (hamstring) and cornerback Artie Burns (groin) are doubtful to play against the Chargers.

With three cornerbacks on the injury report, Seattle will probably need to add a cornerback to their roster. Xavier Crawford is on the practice squad and has already played in four games for the Seahawks this season. He could be added to the roster with Dunn being placed on injured reserve to bolster depth at the position. He also has one remaining practice squad elevation available as well after being called up from the practice squad twice earlier this season before signing with the 53-man roster.

Defensive end L.J. Collier is eligible to be activated from injured reserve after getting a full week of practice in. He injured his thumb in practice last week, which set back his return for the reserve list. Collier has been out since mid-August when he injured his elbow in the team's mock game scrimmage at Lumen Field.

"He did well. He was back to normal," Carroll said. "He did a good job so he's available to us if we can do that."

Linebacker Bruce Irvin could be a possibility to be a practice squad elevation as well now that he's completed a second week of practice with the team.

"He's much farther along," Carroll said. "It was way too much to ask of him last week. So this worked out fine. We're thinking that he's ready to play and we're not hesitant on that thought at all, we just got to see if we can work it all out."

Wide receiver Dee Eskridge was absent from practice on Friday as he was having a baby with his girlfriend.