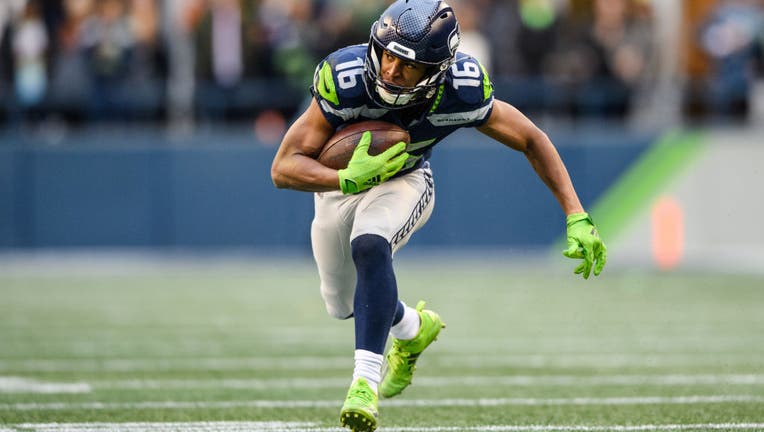 RENTON, Wash. - As far as Tyler Lockett is concerned, his surgically-repaired hand can take all the time it needs to heal in the offseason.

Lockett is planning to play Sunday for the Seattle Seahawks in a pivotal contest against the New York Jets less than two weeks removed from a surgery that put a plate and 10 screws in his left hand.

"We're only guaranteed two games until you get something else. I could sit at home in the offseason and get my hand right," Lockett said after practice on Friday.

"Sometimes you got to have people protect you from yourself. So they got to find the best way, if I am able to play, just to be able to take care of my hand, make sure my hand is good for them. Because to me, I don't really care as much. So that's why I got to do what's in the best interests of me because they're looking out for me more than me."

Lockett is officially questionable to play against the Jets on Sunday. He was a full participant in Friday's practice after returning to limited work on Thursday.

"He did well. He’s still questionable on the chart, but he did quite well," head coach Pete Carroll said. "I want to see how he feels after the work today because he worked again today in practice and took a full day's practice and did all that. So we just got to just check with him. Make sure he's OK."

"There was no indication of anything bothering him catching the ball. Right from the first time he came out here. It started with nerf balls and he was fine."

Lockett was injured three plays from the end of the team's loss to the San Francisco 49ers on Dec. 15. After a pass from Geno Smith went through his hands, he was hit and driven into the ground by cornerback Jimmie Ward. Lockett said he couldn't move his hand afterward as he was stuck in the shape of "C." The injury is to a bone in his hand at the base of his left index finger that kept him from straightening his hand.

Lockett has only missed three regular season games during his career with the Seahawks. A broken leg forced him to miss the final game of the 2016 season (and two playoff games). A case of COVID-19 kept him out of a game last year against the Los Angeles Rams and he missed last week's game against the Kansas City Chiefs following surgery.

"It just sucked because one game that I definitely wanted to play with KC," Lockett said. "Because I went to K-State, you know, played there (in) preseason and it was like a home game. Everybody was cheering for me and stuff. And so I was really looking forward to go there. Like, a lot of my family on my dad's side was there. And it was just unfortunate that I wasn't able to go because I had to get surgery."

Lockett wanted to avoid surgery, but elected to go forward with it when told he could potentially get back to play against the Jets. He had the procedure done Monday, Dec. 19.

"I feel like it's just been the same," Lockett said of catching footballs this week. "I mean, obviously I got surgery, but I think the athletic trainers did a good job padding me up and stuff like that to where I can still go out there and play the same way I've been playing.

"I've practiced here and there, but just with catching the ball, I mean, I feel the same. If I'm out there and I'm playing, I mean, I'm not about to use this as no excuse."

– Wide receiver Marquise Goodwin was downgraded to doubtful to play against the Jets on Sunday due to shoulder and wrist injuries. Both issues occurred on the same play against the Chiefs last week.

Goodwin had a sling on he left arm during practice on Thursday and Carroll said it was an SC (sternoclavicular) joint sprain.

Homer, Lucas and Neal all did not practice for the Seahawks on Friday. Walker was limited and Woods was a full participant.

"He’s going to have some fresh legs," Carroll said. "We wanted to make sure that we took care of some guys, and we did today. We want to be fast on Sunday, so we looked after a couple of guys today.

(on Woods) "Al made it through practice today, I have to check in with him tomorrow. Again, same thing with guys that are coming back, but he looked pretty good."

(on Lucas) "It’s his patella tendon irritation that he has that is bothering him, so we have to wait and see."

(on Homer) "He has a high ankle sprain. … We have to wait and see on how he does. We’ll take a look at him on Sunday and see where he is. He’s got a legitimate ankle sprain that showed up. We know those have a course of their own. He has had the injury before I believe, so that usually helps guys get back. He’s hopping around. He’s doing some things. He’s not unable to move, so we’ll see what happens."

(on Neal) "Ryan didn’t get any work today, no work today, so we are going all of the way until game day."