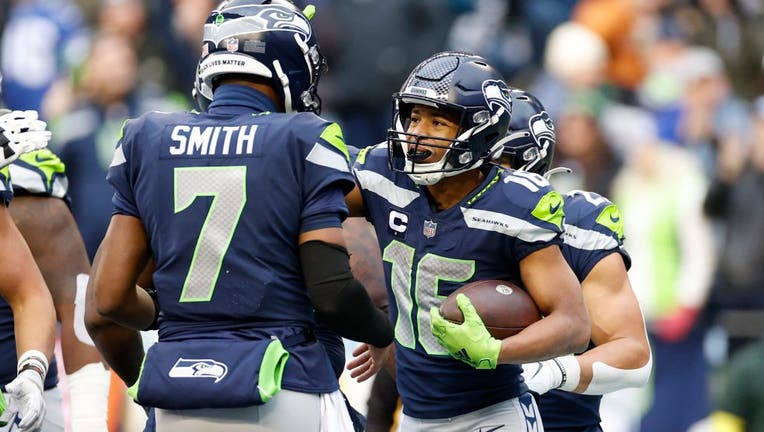 SEATTLE, WASHINGTON - DECEMBER 11: Tyler Lockett #16 celebrates with Geno Smith #7 of the Seattle Seahawks after scoring a touchdown in the second quarter of the game against the Carolina Panthers at Lumen Field on December 11, 2022 in Seattle, Washi

RENTON, Wash. - Just over a week removed from surgery for a broken finger, wide receiver Tyler Lockett was back on the field with the Seattle Seahawks on Wednesday.

Lockett was catching footballs and throwing passes during the team's walkthrough before lunch.

"If you were watching walkthrough, you wouldn't even know that anything was going on," head coach Pete Carroll said. "He just went through and did everything in walkthrough. We'll be careful with him in practice and find out what his limits are. He looked great. Throwing, catching, all that stuff. We'll see."

Lockett fractured his finger in the team's loss to the San Francisco 49ers on Thursday night two weeks ago. He had surgery the following Monday and missed this past week's game against the Kansas City Chiefs while he did rehab work in Los Angeles.

"This is a remarkable story now and he's writing it right now for us," Carroll added. "He's not even wavering. He's not even phased by it."

"I talked to him today. I think he's gonna play," Brooks said. "He's a warrior, man. Hand is swollen. He's got stitches, but he's a warrior. It's going to be a big deal for us to just see him in the locker room getting ready to play. Brings me a lot of joy knowing that he's going to be on the other side of the ball playing, trying to help us win."

Lockett officially did not practice on Wednesday. Carroll said that Lockett wouldn't need to practice for them to feel comfortable with him playing. It's just a matter of if he can be comfortable doing everything he needs to do to play.

Will Dissly placed on injured reserve:

Tight end Will Dissly was placed on injured reserve on Tuesday after sustaining a knee injury in Sunday's loss to the Chiefs.

"He's got a really unusual injury that we've not seen before," Carroll said. "Not that that makes it so bad. It's not that. It's just a rare injury at the top of his fibula and where it connects and all that. We haven't had that situation, but it is serious enough that it's going to be a bit."

Dissly played through the injury briefly before ultimately being forced from the game. He'll miss the rest of the season for the Seahawks. Carroll said it's not decided yet whether Dissly will need surgery.

"They wanted to give it a chance to heal first and then see what happens. We won’t know that for a few weeks," Carroll said.

With Dissly out, the Seahawks brought back Jacob Hollister on their practice squad as additional depth at the position. Tyler Mabry has been on the practice squad all season and would likely be the first to be called up to play.

"Tyler Mabry has worked hard there at that spot and he's like a regular for us. So we'll see how it goes," Carroll said.

Hollister appeared in 27 games for Seattle during the 2019-20 seasons. He had 66 receptions for 558 yards and six touchdowns. He was released by the Las Vegas Raiders earlier this month.

– Nose tackle Al Woods was a full participant in Wednesday's practice. He's missed the last two games for Seattle with an Achilles injury.

"He’s really excited to be back. He was missed enormously and was good to see him out there clunking around with our guys and getting back into the rhythm of it," Carroll said.

– Right tackle Abe Lucas did not practice on Wednesday due to a thigh injury that forced him out of Sunday's game against the Chiefs.

"He wants to play, and he wants to go. What’s bothering him is something that he had before, so he knows what it is and he’s not worried about it," Carroll said.

Stone Forsythe played in place of Lucas for the remainder of the game in Kansas City.

"He did well. He jumped right in and fit in quickly and was very comfortable with it other than the one false start. He did great," Carroll said.

– Safety Ryan Neal did not play last week due to an ongoing knee injury. He did take part in walkthrough earlier in the day.

Teez Tabor and Johnathan Abram handled the strong safety snaps in Neal's place against the Chiefs.

"I thought there were some good things that they did and some things that need to be cleaned up as well," defensive coordinator Clint Hurtt said. "That one tough catch on third down with Teez and Travis Kelce, that was a heck of a throw and a catch. I think if he had the opportunity to do that one again, he would have tried to go late with his hands and tried to poke the ball out. There were a lot of positives there, but there was stuff that needs to get cleaned up with the both of them."

– Running backs Ken Walker III and DeeJay Dallas continue to manage ankle injuries. Walker did not practice on Wednesday after playing most of Sunday's game.

"Ken will get rested today. He’s not going to get a bunch of work," Carroll said.

Dallas was a limited participant in practice as he continues to manage his recovery from a high-ankle sprain.

"DeeJay was really sore the next day, but he’s already bounced back, and he’s really excited about the fact that the soreness he felt in the postgame went away. So, he ran really well out there today," Carroll said.

– Wide receiver Marquise Goodwin didn't practice due to a wrist injury that sidelined him during the game in Kansas City.

"He’s going to rest his way through this week, some of it, and he’s planning on playing. We’ll see what happens," Carroll said.

Mack had not been able to get to the team's headquarters as of Wednesday afternoon due to travel issues amidst winter storms across the country. He is expected to get to Seattle Wednesday evening.

"He's coming in late tonight, so it's going to be hard (to play). He's going to have very few opportunities," Carroll said.

Nixon was added to the roster last week but did not play against the Chiefs.

– Cornerback Xavier Crawford and running back Godwin Igwebuike were signed off the practice squad.

Crawford appeared in three games for Seattle earlier this season and can help on special teams with Travis Homer injured. Igwebuike has locked down the team's kick returner job after averaging over 28 yards a return on nine attempts in the last three games.

Igwebuike entered the NFL as a safety and eventually played the position for the Seattle Dragons of the XFL during their pandemic-shortened season in 2020. The Detroit Lions converted him to a running back last year and he had 18 carries for 118 yards and a touchdown for the team last year.

Igwebuike has spent most of the season on Seattle's practice squad.

"He earned it so obviously," Carroll said. "He's been such a factor in the kicking game. … It's a really good story. He's hard-nosed, tough and was ready for it and was fired up about it too."

Running back Tony Jones Jr. and safety Steven Parker were signed to the practice squad to fill the vacancies created by the promotions of Crawford and Igwebuike.

Additionally, the Green Bay Packers signed wide receiver Bo Melton off Seattle's practice squad on Tuesday. Melton was a seventh-round pick this spring but never appeared in a game for the Seahawks. The loss of Melton opened up a spot for the adding of Hollister to the practice squad.

– Cornerback Isaiah Dunn was also designated to return to practice on Wednesday. Dunn has been out since mid-October with a hamstring injury.