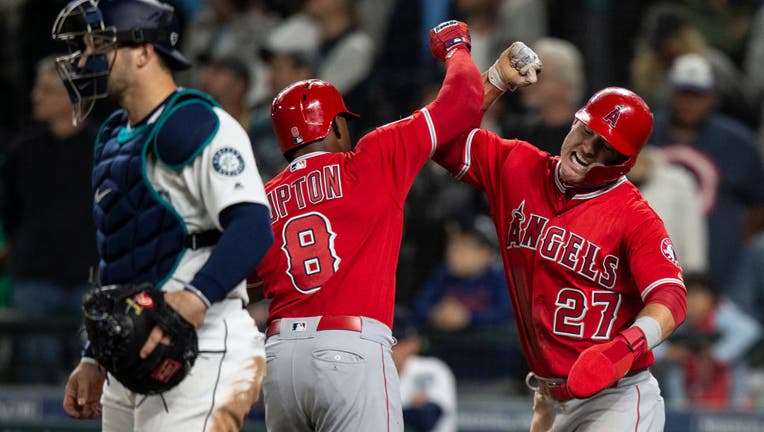 ANAHEIM, Calif. - Mike Trout homered for the eighth time in 10 games and the Los Angeles Angels tripped up the Seattle Mariners’ AL wild-card run with an 8-7 victory Friday night that ended a four-game losing streak.

Trout homered in seven straight games, one shy of the big league record, before failing to hit one Tuesday and Wednesday at Cleveland. He put the Angels ahead 5-3 when he led off the fifth with his 36th home run of the season, tying an Angel Stadium record by homering in a fifth straight home game.

"We have 19 (games to go) and you’re not going to win every one," Mariners manager Scott Servais said. "We’re better than what we played tonight, we know that. But we did do a lot of good things offensively, and we will continue to do that in this series."

The Angels’ Luis Rengifo went deep from each side of the plate in his first career multihomer game. He hit a solo drive in the third batting right-handed against Robbie Ray and a three-run shot batting lefty in the sixth off Matthew Festa that put the Angels ahead 8-4.

"The (second) one is really big because it gives our bullpen a little bit of breathing room, and they can use it a little bit," Angels interim manager Phil Nevin said. "But he’s been really big for us and coming up big in big spots, getting a hit when you need it and playing nice defense too."

Mariners rookie Julio Rodríguez hit his fifth leadoff homer, his 27th of the season. Carlos Santana went deep twice to raise his total to 17 and Ty France hit his 19th.

France hit a two-run homer in the seventh against Andrew Wantz, but with the bases loaded, Sam Haggerty grounded into an inning-ending double play against José Quijada.

Santana hit a two-run homer in the fourth and a solo drive with one out in the ninth against Ryan Tepera, who struck out Jesse Winker and retired J.P. Crawford on a flyout for his third save. The Los Angeles bullpen gave up four runs in four innings.

"Late in the game you have to throw more strikes," Nevin said. "You’re going to give up hits, and I know you’re going to walk guys sometimes, but we have to get better at throwing strikes when (relievers) come out of the gates out there."

Ray (12-10) gave up five runs on eight hits over five innings, while losing his second-consecutive start.

"My last couple (of starts), I feel like I’ve been laboring a little too much, throwing too many pitches," Ray said after also falling to the Atlanta Braves on Sept. 9. "(I’m) not necessarily walking guys but just not being able to put guys away or get them to hit it at somebody. I need to be a little better."

HOMERING AT BIG A

Mariners: 3B Eugenio Suárez departed in the middle of the fifth inning with an injury to his right index finger. X-rays were "inconclusive," according to Servais. … OF Mitch Haniger (back) was out of the starting lineup for the third consecutive game but swung a bat pregame and did some running in the outfield with a chance he could return Saturday. … INF/OF Dylan Moore (oblique) jwent 1 for 4 for Triple-A Tacoma in the start of a rehab assignment and might be able to return during this series. … C Cal Raleigh (thumb) was injured sliding into first base this week and didn’t play.

Angels: INF David Fletcher (hand), who has been reduced to bunting during recent at-bats, was out of the starting lineup and underwent a CT scan that was negative before entering the game in the sixth inning as a pinch runner. After the game, Nevin said Fletcher will be placed on the injured list.