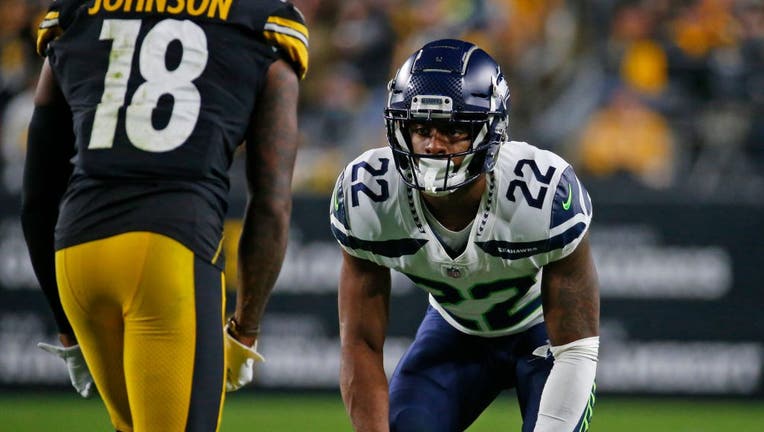 PITTSBURGH, PA - OCTOBER 17: Tre Brown #22 of the Seattle Seahawks in action against the Pittsburgh Steelers on October 17, 2021 at Heinz Field in Pittsburgh, Pennsylvania. (Photo by Justin K. Aller/Getty Images)

RENTON, Wash. - It's been just over a year since cornerback Tre Brown last played in a game for the Seattle Seahawks. After a lengthy recovery process from a torn patella tendon, Brown is back on the roster and set to make his season debut in the near future.

"I don’t know if it will happen (this week) or not," head coach Pete Carroll said. "He’s competing to show that he’s ready to go. He had a good week last week. From this point forward, he’s physically adapted back in, so he could go."

Brown tore the patella tendon in his left knee in a game against the Arizona Cardinals on November 21 last year. He was covering receiver A.J. Green up the sideline and went to leap to defend a pass. Instead, his leg gave out, and he tumbled to the turf.

Brown said he refused to be carted off the field and walked to the sideline with a significant limp. He didn't want to take a cart ride as that would be a sign the injury was really serious.

"I knew that if I got carted off, then I knew it would have been bad. I wanted to see for my own if I could walk off and I did," Brown said.

But after he had his MRI on Monday, Brown's knee completely locked up on him and he couldn't move it. That's when he learned he'd tore his tendon. Brown had surgery just two days after the injury. It took him eight weeks before he was able to walk again.

"Everything is kind of blurry, you’re not sure if you are gaining ground, and what is the progress looking like? You start walking, you’re doing football things, and your tendon is okay, but it’s like, ‘When you get to full speed, how is it going to look?’" Brown said of the struggles of the rehab process.

Brown continued to make slow strides in his recovery and started to see tangible progress near the start of the regular season.

"I’d say right around the beginning of this season," Brown said. "Thank God that we have the best medical staff out here. We all played it safe, and I trust those guys. I feel ten times better than when I did in September."

Brown was designated to return from the physically unable to perform list on October 26 and spent three weeks practicing with the team. Seattle activated Brown from the PUP list last week as the team headed out on its bye week. Now as the group reconvenes for the final seven weeks of the regular season, Brown has a chance to get back on the field for the Seahawks this Sunday against the Las Vegas Raiders.

"It’s been an emotional feeling," Brown said. "I’ve been away from the game for so long, I have been watching everybody do their thing, and just cheering. I wanted to be out there and play with my guys. For the first time, stepping out onto the field a couple of weeks ago, it was very emotional, I’ll tell you that."

Brown appeared in five games as a rookie for Seattle last season and made three starts prior to his knee injury. Like Tariq Woolen and Coby Bryant have done this year, Brown made a strong impression in his limited starts. He allowed just a 63.3 passer rating against on 16 targets last year and a 4.7 yards per target average.

"Just twitchy and fast," safety Ryan Neal said of Brown. "Really good at matching routes and just when guys sit down, he sits down. He's just got a real twitch about him that just kind of sets him apart. We're excited to see that, been seeing it the past couple of days with him just getting some reps on the scout team. He's back to his normal stuff so it's exciting to see."

"I showed that I belong in this league and that I can be one of the best corners in this league because every day it’s me versus me. I’m my biggest critic, so I want to go out there and make those plays. Those plays that I made were a small, little sample of what I can do."

For Brown, he believes he showed that he's capable of playing and succeeding at the NFL level in his limited chances last season and is eager to get another chance to show what he can do.

"I showed that I belong in this league and that I can be one of the best corners in this league because every day it’s me versus me," Brown said. "I’m my biggest critic, so I want to go out there and make those plays. Those plays that I made were a small, little sample of what I can do."

Seattle doesn't need to rush Brown back into the lineup. Woolen and Michael Jackson have locked down the starting jobs on the outside with Bryant handling the nickel job. Brown only played on the left side for the Seahawks last year and the intention is to keep him there as he gets back involved. Jackson has been the starter all year at that spot and has also played well for Seattle.

"I don’t want to do a lot of change ups with him right now. I‘d rather have him go where he is most comfortable," Carroll said. "He’s fine about playing on the other side he said, but right now, he’s going to play on the left side for a while. We’ll see how it goes."

Coming off the bye week, the Seahawks are quite healthy. Wide receiver Dee Eskridge injured his hand against the Tampa Bay Buccaneers in Germany and was the only player held out due to injury. Defensive end L.J. Collier also did not practice due to an illness.

Safety Ryan Neal (ankle) and linebacker Cody Barton (foot) were both full participants and the only other entries on the team's injury report for Wednesday.

The team won't practice on Thanksgiving before returning to action on Friday. They practiced on Tuesday instead to give the team the holiday off.