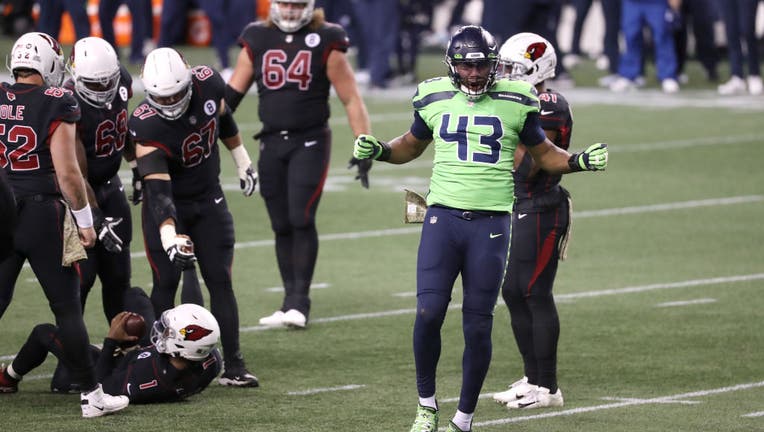 RENTON, Wash. - Carlos Dunlap was quick to dismiss the idea that his arrival suddenly solved the problems the Seattle Seahawks had on their defensive front.

Consider it Dunlap’s way of deflecting recognition when there is pretty solid evidence that his addition to the Seahawks’ defensive line is already paying off in a significant way.

“They said I was coming here to save the rush, but I see guys getting healthy, and all those guys getting sacks,” Dunlap said after Seattle’s win over Arizona last week. “It’s not like I got the whole 16 (sacks). I only got two out of those. To say I came to fix the rush; we just had to put ourselves in better situations and get guys healthy on the edge.”

Over the past four weeks, the Seahawks’ once-dormant pass rush has suddenly awakened, thanks in no small part to the addition of Dunlap after his trade from Cincinnati. Dunlap has three sacks in the three games he’s played heading into Monday night’s matchup against Philadelphia.

Seattle has 16 sacks total in the past four games. The Seahawks had nine in the first six games of the season. And there is no reason to think that surge of pressure will slow down this week against a Philadelphia offense that has given up 40 sacks this season, the most in the NFL.

Dunlap’s influence in helping create that improvement is not lost on his teammates.

“You have a guy out there that everybody knows is a playmaker and you got to be accountable for,” Seattle linebacker Bobby Wagner said. “You got to know where he’s at. ... But he’s just very, very smart and so he picked up the defense really fast. You watch him out there on perimeter plays or effort plays, you could just see him kind of flying around all over the field. And so just having another playmaker out there definitely helps us and we’re grateful to have him.”

Seattle’s pass rush was considered the biggest concern coming into the season and those worries proved to be accurate. Part of the reason the Seahawks’ defense was shredded by opponents through the air earlier in the season was because of the lack of pressure quarterbacks were facing.

As the pressure on QBs has increased in recent weeks, the results for the defense have looked much better for Seattle — with one notable exception. While Seattle recorded a season-high seven sacks against Buffalo, it also allowed Josh Allen to throw for 415 yards and put up 44 points.

But Seattle’s defense stymied San Francisco for three quarters in Week 8; had a solid second half in a loss against the Rams; and had its best overall game of the season in last week’s 28-21 win over Arizona.

After failing to hit Kyler Murray in the first matchup against the Cardinals, the Seahawks had seven QB hits and three sacks, including Dunlap’s on Arizona’s final offensive play.

“There’s going to be more games to play. I just have to continue to show up,” Dunlap said. “This is what they brought me here for. I’m just happy I could deliver.”

So far, coach Pete Carroll is thrilled with Dunlap’s addition. He hopes the team can continue to create pressure with its defensive line and rely on the blitz less than it did earlier in the season.

“Let me state the obvious that he has had an impact,” Carroll said. “He knocks the pile back. He knocks the tackle into the quarterback and creates lanes for other guys. He’s contributing to other guys’ rushes as well. We’ve just taken a step forward with how we’re doing things.”